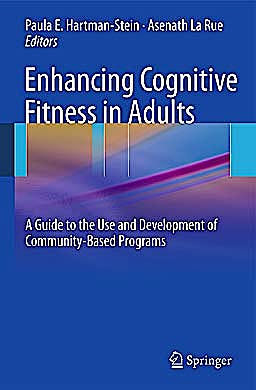 Enhancing Cognitive Fitness in Adults. a Guide to the Use and Development of Community-Based Programs

atención primarianeurologíageriatría
ABOUT THIS BOOK

One of the major milestones of aging research is the concept that dementia is not a one-cause, one-effect disorder. From this realization, scores of research-based cognitive wellness programs have been established alongside traditional medical interventions to help older adults deal with memory decline, cognitive deficits,and other signs of brain aging.

Enhancing Cognitive Fitness in Adults takes a wellness-support rather than a disease-based approach to its subject, presenting a wide range of promising interventions among the diversity that is currently being offered, from intergenerational volunteer programs, writing workshops, and multimedia strategies to meditation,biofeedback, nutrition, and exercise. Introductory chapters discuss the findings driving the cognitive-wellness movement, and the possible roles such programs may have in preserving critical brain resources, increasing cognitive flexibility, and avoiding devastating brain decline for improved quality of life in older adults. Areas of coverage include:

Foreword by Peter Whitehouse, M.D., Ph.D.: Why drugs are not the answer to maintaining and enhancing mental acuity in later life.- Introduction .- Part I: Research Foundations of Brain Fitness Interventions.- Brain plasticity in aging and early-stage dementia.- Lessons learned from training interventions.- Part II: Community-Based Programs to Enhance and Sustain Healthy Aging.- Memory enhancement strategies: What is known, and what is new?.- Keys to a Sharp Mind: Results of a model program designed by retirees in an independent living community.- The Odyssey program: Friendly competition to boost cognitive fitness.- Spelling Bees for Older Adults: Creating an old fashioned cognitive–social event in your community, or Why does the AARP host a nationwide spelling contest for people over 50? .- Intergenerational schools: Educational models for the future? .- Programs emphasizing engagement in the arts.- TimeSlips and other narrative therapies: How story telling helps older adults.- Home and cognitive fitness: Utilizing "Posit Science," electronic games, and Internet programs at home, in senior centers, and in retirement communities.- Exercise and cognitive fitness in late life: Recommendations from an exercise physiologist.- University Without Walls for seniors: Use of teleconferencing to reduce isolation and increase cognition.- Part III: Cognitive Wellness Interventions for Older Adults with Cognitive Impairment.- Helping the older adult with mild cognitive impairment.- Programs that caregivers can implement: What Maria Montessori knew about helping frail elders.- How can speech therapy promote cognitive skills.- The role of medications and supplements

Paula Hartman-Stein, Ph.D., is a clinical psychologist, founder of the Center for Healthy Aging, and director of geriatric psychology for Summa Health System. She received her doctoral degree from Kent State University in 1982, going on to complete her post-doctoral training in the departments of medicine and surgery at Akron General Medical Center, and her geropsychology training at Case Western Reserve University. She is an assistant professor of psychology at Northeastern Ohio Universities College of Medicine, adjunct associate professor of psychology at Kent State University, and senior fellow in the Institute for Life Span Development and Gerontology at University of Akron. In 2006 she received the Alfred M. Wellner Ph.D. Senior Career Psychologist Award recognizing excellence in a health service provider in psychology by the National Register of Health Service Providers in Psychology. She is a fellow and past president of APA's Division 12 (Clinical Psychology) and a member of the National Academy of Practice in Psychology of the National Academies of Practice, Psychologists in Long-Term Care, American Gerontological Society of America, American Society on Aging, and Association for the Advancement of Psychology.

Asenath LaRue, Ph.D. is a neuropsychologist with interests in both normal cognitive aging and dementia. She has been a faculty member of the Neuropsychiatric Institute at UCLA and the Department of Psychiatry at the University of New Mexico, and became a senior scientist at the Wisconsin Alzheimer's Institute, Department of Medicine, University of Wisconsin-Madison in 2004. She has been a clinician, researcher, and educator in the fields of aging and dementia for more than 25 years. She is on the board of directors for the Alzheimer's Association, a Fellow of the American Psychological Association, and a member of the National Academy of Neuropsychology.