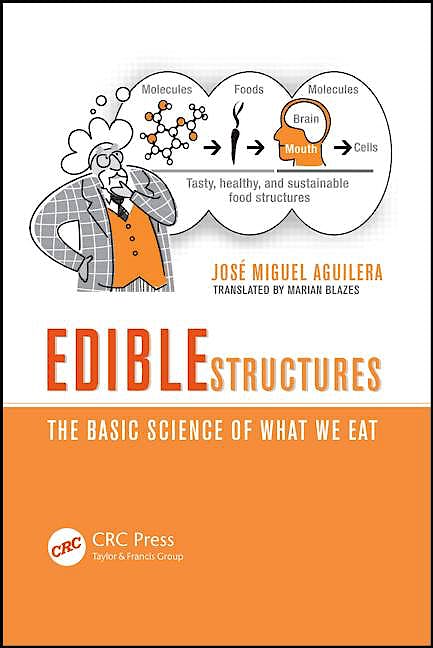 Edible Structures. the Basic Science of What We Eat

Nature converts molecules into edible structures, most of which are then transformed into products in factories and kitchens. Tasty food structures enter our mouths and different sensations invade our bodies. By the time these structures reach our cells, they have been broken back down into molecules that serve as fuel and raw materials for our bodies.

Drawing from the physical and engineering sciences, food technology, nutrition, and gastronomy, Edible Structures: The Basic Science of What We Eat examines the importance of food structures—the supramolecular assemblies and matrices that are created by nature and when we cook—rather than the basic chemical compounds that are the more traditional focus of study. The central objectives of this book are to address the pressing food trends of this century, including:

Entertaining and informative, Edible Structures: The Basic Science of What We Eat uses scientific yet understandable terms throughout to facilitate the communication between experts and the educated public, especially those who are curious, love to cook and innovate in the kitchen and/or want to enjoy good food. The language and concepts presented in this book give the reader some access to specialized texts and scientific journals, and above all, to the best and most current information available on the Internet and other media.

José Miguel Aguilera is a professor in the College of Engineering at the Pontificia Universidad Católica de Chile (PUC). A chemical engineer (PUC, 1971) he received a master of science from MIT (1973), a doctorate from Cornell University (1976), both with specialization in food technology, and an MBA from Texas A&M University (1983). He has been the Head of the Department of Chemical and Bioprocess Engineering at PUC, Associate Dean for Development and the Director of Research and Postgraduate Studies in the School of Engineering.

Dr. Aguilera is the author or editor of 13 books, 25 book chapters, and more than 170 articles on food technology and food engineering in international journals. He has been or is on the editorial committee of six international science journals, including Journal of Food Science, Food Engineering, and Trends in Food Science and Technology. He has been a visiting professor at the University of California at Davis, Cornell University, and Technical University Munich, a technical consultant for the FAO, and a scientific advisor for the Nestlé Research Center in Switzerland, for more than 12 years.

Among his most significant awards are fellowships from the Fullbright Commission (1989) and the Guggenheim Foundation (1991), and the Alexander von Humboldt Prize for Research (Berlin, 2002). In the US he has received the International Award (1993), Research and Development Award (2005), and the Marcel Loncin Research Prize (2006), all from the Institute of Food Technologists (IFT). He was appointed a commander in the Order of Orange-Nassau by the Dutch government, and is a Fellow of the IFT and the International Association of Food Science and Technology. In 2008 he was awarded the National Prize for Applied Science and Technology, the highest scientific honor in Chile, and in 2010 was first Chilean to become a foreign associate member of the U.S. National Academy of Engineering, for his contributions to the understanding of the role of food structures and their properties.