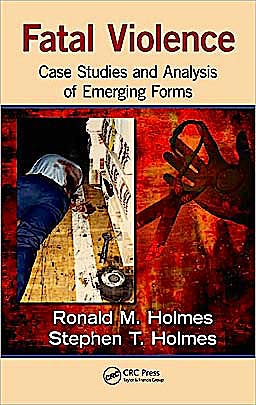 From serial murderers to parents who kill, Fatal Violence: Case Studies and Analysis of Emerging Forms provides an insider’s look at a phenomenon that has existed since the dawn of man and cuts across social/economic barriers and cultures. Offering a rare glimpse into the minds of predators and containing chilling details of motives and methods, this volume explores gang violence, serial and mass murderers, filicide, rape, workplace violence, school shootings, and hate crimes. It also delves into the unusual and shocking practices of vampirism and cannibalism.

Bringing wisdom from years of studying killers and trying to understand the motives behind why these individuals do what they do, the authors present information that has previously gone uncovered or merely speculated upon. This fascinating volume includes:

Steeped in research, the book contains tables with demographic data and events, discussion questions to provoke further inquiry, and numerous references for further study, making it a compelling resource for professionals and academia alike.

Parents Who Kill
Why Do Parents Kill?
Mothers Who Kill
The Victims of Children Killed by Parents

Rape
Rape
Rape as a Weapon
Why Do Men Rape?
The Extent of Rape
Children
Victims of Rape
Rape and the Law
Characteristics of Rapists

Hate Groups: The Ku Klux Klan, Skinheads, and Other Groups
The KKK: An Introduction to Two Centuries of Hate
Klan Activities
Hate in the 21st Century
Skinheads
Skinhead Groups in the United States
The Internet and Hate
Economy
Blogs, Twitters, and Chat Channels
Immediate Access to the Entire World
Educational
Finding Others of the Same Interests