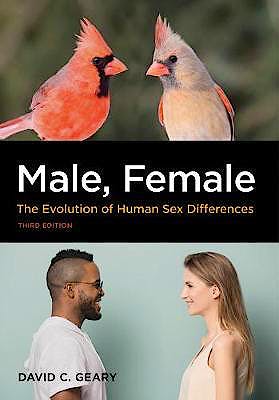 Now in a third edition, the authoritative classic text Male, Female evaluates both foundational and recent scholarship on the evolution of human sex differences, including how males and females differ in modern contexts.

In comprehensive detail, David C. Geary describes how men and women differ based on evolutionary principles, how human sex differences are similar to those found in other species and how the expression of these differences is uniquely human. The principles of sexual selection - such as female choice and male-male competition - explain sex differences in parenting, mate choices, ways of competing for mates, social-political preferences, development, the brain, and cognition. Far from being one-sided in the nature-versus-nurture debate, Geary shows how an evolutionary framework can easily incorporate the influence of experience and cultural context on the development and expression of sex differences.

Thoroughly updated and expanded, this third edition adds a chapter on sex differences that emerge in modern contexts, like occupational choices, variation in sexual orientation, gender identity, and relationships. Scholars from a wide range of sciences have much to learn from this monumental volume.

David C. Geary is Curators' Distinguished Professor at the University of Missouri. His work spans topics ranging from mathematical cognition to the evolution of sex differences. He has authored four books: Children's Mathematical Development (1994); Male, Female (1998, 2nd edition, 2010); Origin of Mind (2005); and Evolution of Vulnerability (2015). He co-authored Sex Differences (2008) and co-edited six other books. His work has been featured in various media outlets, including the New York Times, The Guardian, Washington Post, The Atlantic, The Wall Street Journal, and many others. He lives in Columbia, Missouri.