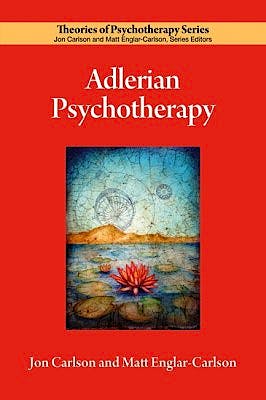 From cognitive-behavioral, to existential, phenomenological, schema, and humanistic therapies, the ideas of Alfred Adler are at the heart of many contemporary approaches to psychotherapy. In some ways, however, Adler's ubiquity has made him invisible.

In this book, Jon Carlson and Matt Englar-Carlson explore the theory, history, research, and practice of a person-centered approach to psychotherapy that was far ahead of its time.

In Adler's view, all behavior has social meaning, and the socio-cultural context of a person's life is a driving influence on his or her mental health and life experiences. With his emphasis on social interest – a sense of belonging to and participating in the common good – Adler envisioned a psychology of growth, where people could strive to overcome difficulties and change their lives under their own power.

Counseling and psychotherapy must therefore encourage the client to master the core tasks of life: work, friendship, and love-intimacy.

Jon Carlson, PsyD, EdD, ABPP, is the Distinguished Professor of Adlerian Psychology at Adler University, Chicago, and a psychologist with the Wellness Clinic in Lake Geneva, Wisconsin. Dr. Carlson is also Professor Emeritus at Governors State University in the Division of Psychology and Counseling, University Park, Illinois. He is a fellow of APA, the American Counseling Association, and the Wisconsin Psychology Association.

Dr. Carlson has written 62 books and more than 180 articles and book chapters, and created more than 300 professional training videos that are being used in universities and training centers around the world. Five of the videos and seven of the books are on Adlerian psychotherapy. He has served as the editor of several periodicals, including The Journal of Individual Psychology and The Family Journal.

He holds diplomates in both family psychology and Adlerian psychology, received a Certificate of Psychotherapy from the Alfred Adler Institute (now Adler University), and received the Lifetime Contribution Award from the North American Society of Adlerian Psychology. He received the Distinguished Psychologist Award (lifetime contribution to psychotherapy, APA Division 29) and the 2011 Distinguished Career Contributions to Education and Training Award from APA.

Matt Englar-Carlson, PhD, is a professor of counseling and the director of the Center for Boys and Men at California State University–Fullerton. He is a fellow of the APA (Division 51 - Society for the Psychological Study of Men and Masculinity).

He was raised Adlerian and is interested in promoting culturally responsive Adlerian practice. As a scholar, teacher, and clinician, Dr. Englar-Carlson is focused on training clinicians to work more effectively with their male clients across the full range of human diversity.

He has more than 40 publications and 65 national and international presentations, most of which are focused on men and masculinity, social justice, and diversity issues in psychological training and practice, and on theories of psychotherapy.

Dr. Englar-Carlson coedited the books In the Room With Men: A Casebook of Therapeutic Change, Counseling Troubled Boys: A Guidebook for Professionals, Beyond the 50-Minute Hour: Therapists Involved in Meaningful Social Action, and A Counselor's Guide to Working With Men, and was featured in the APA-produced DVD Engaging Men in Psychotherapy.

He was named the Researcher of the Year and Professional of the Year by the Society for the Psychological Study of Men and Masculinity. As a clinician, he has worked with children, adults, and families in school, community, and university mental health settings.