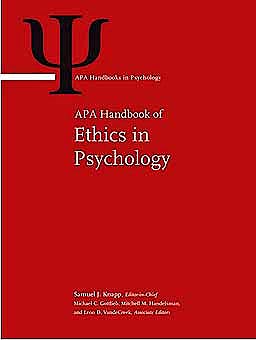 Discussions of ethics in psychology often focus primarily on misconduct, punishment, and legal sanctions, and too often ignore aspirations, values, principles, and virtues. The net effect of this unbalanced approach creates an atmosphere in which psychologists have viewed ethics as unpleasant and frightening, instead of inspiring and uplifting. Psychologists naturally must be concerned about laws, codes, and regulations, but these documents do not constitute the beginning and end of the conversation on ethics.

The editors of this 2-volume reference propose that ethics is best viewed as a striving toward the highest ethical ideals, not just as an injunction against rule violation—a perspective they refer to as "positive ethics" or "active ethics"—and they encourage psychologists to elevate their ethical observance above the minimal standards found in law and enforceable ethics codes.

Against this backdrop, handbook contributors investigate the complexities of ethical behavior in clinical, educational, forensic, health, and "tele-" psychology. Several chapters zero in on the teaching of ethics and on ethically minded research relevant to professionals working in experimental psychology.

By comparison with many ethics textbooks, this two-volume handbook covers a wider range of subjects and pursues them in greater detail. For instance, it reflects important recent advances in research and technology that present new opportunities and challenges for practice and scholarship. Also, it takes a serious look into some burgeoning new areas such as life coaching and providing services over the Internet. These are just two examples of developments that present fascinating, novel ethical questions that deserve attention.

Significant perspectives presented in the handbook include:

Samuel J. Knapp, EdD, ABPP, has been the director of professional affairs for the Pennsylvania Psychological Association since 1987. His primary area of interest is in professional ethics. His other areas of interest include mental health and well-being, public policy advocacy, and religion and psychology.

In addition to writing several books, numerous book chapters, and more than 80 peer reviewed articles, Dr. Knapp has given more than 250 professional presentations, mostly on ethical issues. Through his work with the Pennsylvania Psychological Association, Dr. Knapp has provided thousands of consultations on ethics to psychologists. In return, these consultees have enriched him by instructing him on the issues they face daily, and their issues provide much of the content for his publications and presentations. He feels much appreciation for the board of directors of the Pennsylvania Psychological Association for allowing him to serve the psychological community in Pennsylvania in this manner.

Among his other ethics related activities, Dr. Knapp coordinates an annual "Ethics Educators" workshop in Pennsylvania; has served as a member of the Task Force responsible for rewriting the 2002 APA Ethical Principles of Psychologists and Code of Conduct; coauthored an ethics text book (Practical Ethics: A Positive Approach with Leon D. VandeCreek); served as a consultant for the APA Insurance Trust, where he worked on the well-received book Assessing and Managing Risk in Professional Practice; and received the 2009 award for ethics education from the APA Ethics Committee. He also teaches ethics in the doctoral program in clinical psychology at the Philadelphia College of Osteopathic Medicine.

Dr. Knapp is part of a cadre of psychologists, most of whom participated in this volume, who work from the framework of positive (or active, or integrated) ethics, which attempts to shift the focus on ethics education away from an emphasis on laws and disciplinary actions to a broader approach that appreciates the importance of overarching ethical principles and striving for ethical ideals. A positive perspective permeates many of the chapters in this handbook.

Dr. Knapp is married to Dr. Jane Heesen Knapp, an accomplished psychologist in her own right. They have two children, Michelle Nakasone (married to Jon Nakasone) and Valerie Dietrich (engaged to Greg McClellan); one grandson, Cale Nakasone; and currently share their loving home with Lucy, a mixed breed terrier, and Violet, a Manx cat.