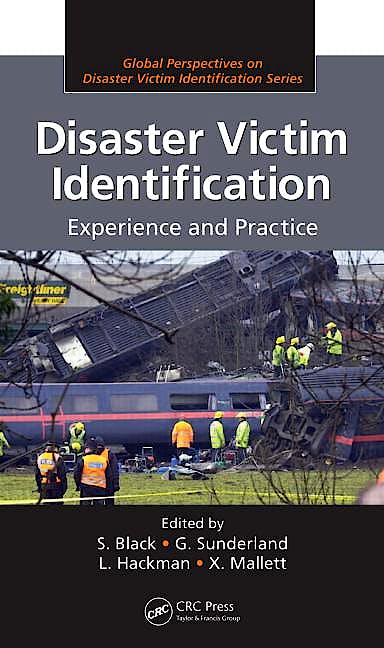 Disaster management has become an increasingly global issue, and victim identification is receiving greater attention. By raising awareness through past events and experiences, practitioners and policymakers can learn what works, what doesn’t work, and how to avoid future mistakes. Disaster Victim Identification: Experience and Practice presents a selection of key historical incidents in the United Kingdom and includes candid discussions of potential areas for improvement in preparedness and future deployment capabilities.

Each chapter in the book addresses a specific disaster and covers a number of main points in relation to the incident. For each event, the book presents data such as the manpower available at the time of the disaster, the number of officers involved in the deployment, and their relevant experience at the time. Details of the disaster follow, as well as the recovery and identification methods employed, the number of fatalities and casualties, and lessons learned. The book also explores the short- and long-term effects that the disaster had on the response team and the community. Finally, each chapter examines important present-day developments in relation to the event. The book summarizes important aspects of the particular disaster in terms of legislative, moral, practical, or other contribution to the field of mass disaster planning, preparation, and deployment on a wider scale.

Viewing disaster management from a global perspective, this volume contains the combined input of academics, forensic specialists, trainers, and law enforcement professionals who focus on actual cases to honestly assess events and provide recommendations for improvement.

Sue Black is director of the Centre for Anatomy and Human Identification (CAHID), University of Dundee. Professor Black was awarded a police commendation by the Association of Chief Police Officers (ACPO) in 2008 for development and implementation of the UK national advanced disaster victim identification training course. She holds a bachelor of science (honors), a doctorate in human anatomy, and an honorary DSc in recognition of services to forensic anthropology. She is a fellow of the Royal Society of Edinburgh and the Royal Anthropological Institute and honorary fellow of the Royal College of Physicians and Surgeons of Glasgow.

Graham Sunderland retired in 2009 as assistant chief constable in Cumbria, where he had been in charge of crime and operations since 2004, prior to which he spent 25 years in West Yorkshire. He has held many positions within the police service, having acted as senior investigating officer and base control unit commander. In addition, Mr. Sunderland was the northeast regional hostage negotiator coordinator and the head for public protection issues as a detective chief superintendent. He was senior identification manager for the Selby rail crash and reviewed the response to the tsunami on behalf of Interpol in 2005.

S. Lucina Hackman is the national disaster victim identification program coordinator for the advanced training program based in Centre for Anatomy and Human Identification (CAHID), University of Dundee. She is involved in teaching at both undergraduate and postgraduate levels as well as supervising research projects. She is studying for a PhD, under the supervision of Professor Sue Black, investigating the identification of age in living individuals as applied to asylum applications and those seeking refugee status

Xanthé Mallett is lecturer in the Centre for Anatomy & Human Identification. Dr. Mallett was part of a team that traveled to Brazil to teach best practice in human skeletal identification and has coauthored a considerable number of forensic reports for UK police forces. In her professional capacity as a forensic anthropologist she undertakes casework, research, and teaches techniques in human identification at both the undergraduate and postgraduate level. Her area of expertise is in the comparison of hand images, commonly applied to forensic cases involving digital images. She was involved in the disaster victim identification training and is a council member and membership secretary for the British Association for Human Identification.