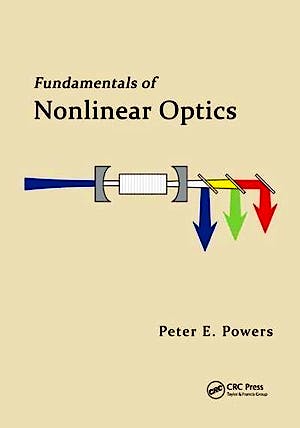 Fundamentals of Nonlinear Optics encompasses a broad spectrum of nonlinear phenomena from second-harmonic generation to soliton formation. The wide use of nonlinear optical phenomena in laboratories and commercial devices requires familiarity with the underlying physics as well as practical device considerations. This text adopts a combined approach to analyze the complimentary aspects of nonlinear optics, enabling a fundamental understanding of both a given effect and practical device applications.

After a review chapter on linear phenomena important to nonlinear optics, the book tackles nonlinear phenomena with a look at the technologically important processes of second-harmonic generation, sum-frequency and difference-frequency generation, and the electro-optic effect. The author covers these processes in considerable detail at both theoretical and practical levels as the formalisms developed for these effects carry to subsequent topics, such as four-wave mixing, self-phase modulation, Raman scattering, Brillouin scattering, and soliton formation.

Consistently connecting theory, process, effects, and applications, this introductory text encourages students to master key concepts and to solve nonlinear optics problems—preparing them for more advanced study. Along with extensive problems at the end of each chapter, it presents general algorithms accessible to any scientific graphical and programming package.

This book fills a longstanding need for a nonlinear optics textbook at an advanced college/introductory graduate level. One of its best features is inclusion of many of the subtleties that are often glossed over in other books on the subject. … Another excellent feature is the provision of a large number of problems at the end of each chapter.
—Mark Cronin-Golomb, Tufts University, Medford, Massachusetts, USA

The book is very well written. I like very much his writing style. His choice of topics is excellent and the book is well organized. The problem sets are also well formulated to give the students confidence in handling real-world problems … . Professor Powers has mastered the subject matter.
—C.L. Tang, Cornell University, Ithaca, New York, USA

The author introduces key concepts in simplified terms, and then generalizes to realistic treatments that emphasize how the various equations are actually used in everyday practice. The diversity of specific topics, worked problems, and homework problems should make the book of interest to a wide audience.
—Jeff F. Young, University of British Columbia, Canada

This book is of great interest both to students and researchers wishing to develop or expand their knowledge of nonlinear optics. It contains details of derivations and practical implementation that are often missing from other texts. It also has extensive problems at the end of each chapter that reinforce and enhance the material presented.
—Marc Dignam, Queen’s University, Ontario, Canada

Peter E. Powers is a professor of physics and electro-optics and the Brother Leonard A. Mann Chair in the Sciences at the University of Dayton. Dr. Powers previously worked at Sandia National laboratories as a post-doctoral research associate. He earned a Ph.D. in applied and engineering physics from Cornell University. His research interests include nonlinear optics and its application to other branches of physics and applied physics.