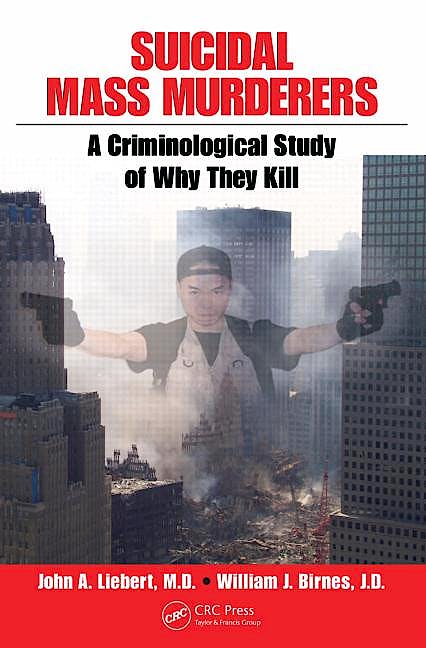 Suicidal Mass Murderers. a Criminological Study of Why They Kill

On April 16, 2007, Cho Seung-Hui, a student at Virginia Tech with a history of mental illness, became the perpetrator of the most infamous school shooting in the history of the United States. In the aftermath of the killings and Cho’s subsequent suicide, one primary question emerged: Why? Suicidal Mass Murderers: A Criminological Study of Why They Kill explores the answer to this and related questions.

Detailing Cho’s descent into madness that culminated in this tragic event, the book asks how we can:

Exploring the concept of whether such violent acts can be predicted, the book reveals the potential warning signs to look for in suspect individuals. First responders, public health authorities, and clinicians must learn to detect these early indicators if there is any hope in preventing a catastrophe such as what occurred at Virginia Tech from ever happening again.

… the definitive book on mass murderers, written by the man who knows more about interviewing and profiling violent offenders than anyone else in his field. Dr. Liebert's work in forensic psychiatry is second to none.
— Robert D. Keppel, Ph.D., author of The Riverman and Serial Violence

No better person could have been chosen … than John Liebert, America’s psychiatric expert on serial killings and mass murder, who is frequently called to assist the law enforcement in such cases as Green River, the Atlanta Child Murders, and the Ted Bundy cases.
— Steven Hirsch, M.D., Forensic Psychiatrist and leading international researcher in the field of schizophrenia

Dr. John Liebert, a well-known and highly respected psychiatrist, has written an eye-opening, timely and important book about a dramatic and tragic subject, with which we are all-too-familiar: It is about individuals in our midst who have perpetrated mass murders and then committed suicide. His astute thesis is that these adult killers were showing clues early in their development that we in the education, corrections and mental health professions should have, and indeed could have, picked up.
Dr. Liebert is very persuasive when he shows that early sensitivity to aberrant behaviors, followed by timely corrective interventions, could have staved off the tragic outcomes which befell the victims, and affected all of us. This significant work should serve as a resource for those who are investigating these terrible occurrences, as well as for those who are interested in preventing such tragedies in the future.
—Dr. Saul Levine, Professor of Clinical Psychiatry, University of California, San Diego, international expert on factors reducing the risk of adolescent violence

Dr. Liebert is a nationally known and respected psychiatrist. His expertise assessing human behavior and dangerousness have contributed to our understanding of those individuals who perpetuate mass homicide and suicide. Dr. Liebert's discussion of these individuals, and their actions, offer insights to help identify and deter future tragedies.
—Dr Robert Johnson, Clinical Psychologist, FORCCOM, US Army, Baghdad, Iraq

When I was in charge of the Missing and Murdered Children case in Atlanta, Georgia during the late 70s and early 80s, John Liebert was one of my psychiatric advisers. He provided valuable insight into the possible motives of the person or persons responsible for the killing of Atlanta's children. Now he has written a book that explains to the reader why mass murderers kill. By examining actual cases, he provides the reader with a clear insight into the phenomenon of mass violence. It is a must read for anyone associated with criminal justice education as well criminal justice and medical practitioners.
—Dr. Lee P. Brown, Chairman and CEO, Brown Group International

. . . Chapter 2, which I think is excellent … [the book raises] many interesting issues. I never knew where least restrictive alternative came from, so I learned something.
—Dr Bill Holliday, Police Psychiatrist of Washington State

I was eager to read Dr. Liebert’s Suicidal Mass Murderers – A Criminological Study of Why They Kill and found the chapters on "Prediction of Violence" and "Potential Signs for Dangerous Behavior" to be the most useful, from a law enforcement point of view. If we can identify and interdict a mass murderer BEFORE a massacre occurs, we will have provided an extremely valuable service. I can assure the reader that every murder victim would have preferred the PREVENTION of that murder to a detailed police investigation AFTER the fact! Dr. Liebert’s splendid contribution toward that goal will be welcomed by all concerned and will help to save lives that might otherwise be lost.
— D.P. Van Blaricom, MPA, Chief of Police (Retired), Bellevue, Washington

John Liebert, M.D., is a Diplomat of the American Board of Psychiatry and Neurology and is in the private practice of neuropsychiatry, with special interests in both psychopharmacology and forensic problems of children, adults, and the elderly. His career has been focused on the association of trauma and human destructiveness, about which he has extensively lectured and written. He served as special forensic psychiatry consultant to the Ted Bundy, Green River, Atlanta Child Murders, and Charmer cases.