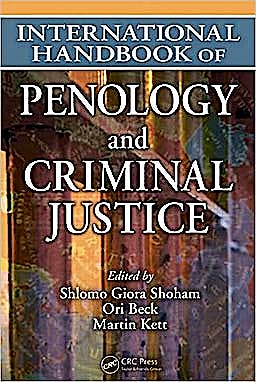 At the outset of the twenty-first century, more than 9 million people are held in custody in over 200 countries around the world.
--from the essay "Prisons and Jails" by Ron King

The first comparative study of this increasingly integral social subject, International Handbook of Penology and Criminal Justice provides a comprehensive and balanced review of the philosophy and practicality of punishment. Drawn from the expertise of scholars and researchers from around the world, this book covers the theory, practice, history, and empirical evidence surrounding crime prevention, identification, retribution, and incarceration. It analyzes the efficacy of both traditional methods and thinking as well as novel concepts and approaches.

Beginning with a study of the changing attitude of penal practice in Florida from one of offender transformation to one of risk-management, imprisonment, surveillance, and control, this volume embarks on an objective and sober appraisal of every aspect of the field. Contributions consider the sociology of incarcerated prisoners including the increasing prevalence of prison suicides. The book evaluates arguments regarding the world-wide abolition of capitol punishment from moral, utilitarian, and practical positions. It examines non-incarcerative and alternative punishments such as financial restoration and restrictions of liberty, as well as the positive effects of Victim Offender Mediation. It also considers several methods aimed at achieving measurable crime prevention including identifying at-risk juveniles and minimizing crimes of opportunity, as well as the pros and cons of employing the coercive power of police.

Further essays consider subjects such as international policing, the roles of prosecution and defense attorneys, current discretionary sentencing practices, and the role and treatment of victims. The volume concludes with two chapters of case studies that provide a "hands-on" feel for the interplay of the concepts discussed.