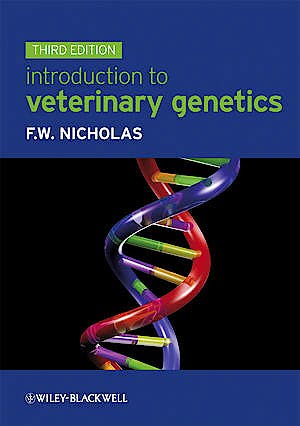 bioquímicagenéticahistologíabiología celular y molecular
The concepts of veterinary genetics are crucial to understanding and controlling many diseases and disorders in animals.  They are also crucial to enhancing animal production. Accessible and clearly presented, Introduction to Veterinary Genetics provides a succinct introduction to the aspects of genetics relevant to animal diseases and production. Now in its third edition, this is the only introductory level textbook on genetics that has been written specifically for veterinary and animal science students.

This book describes in detail how genetics is being applied to artificial selection in animal production.   It also covers the conservation of genetic diversity in both domesticated and wild animals.

New for the Third Edition:

Introduction to Veterinary Genetics is still the only introductory genetics textbook for students of veterinary and animal science and will continue to be an indispensable reference tool for veterinary students and practitioners alike.

6 Familial disorders not due to a single gene

19 Biotechnology and the future

Frank Nicholas is Emeritus Professor of Animal Genetics in the Faculty of Veterinary Science at the University ofSydney.  He has edited and co-authored several books about genetics and one about Charles Darwin, and he created and maintains Online Mendelian Inheritance of Animals (OMIA; omia.angis.org.au), a comparative knowledge-base of genetic disorders and other familial traits in non-laboratory animals.