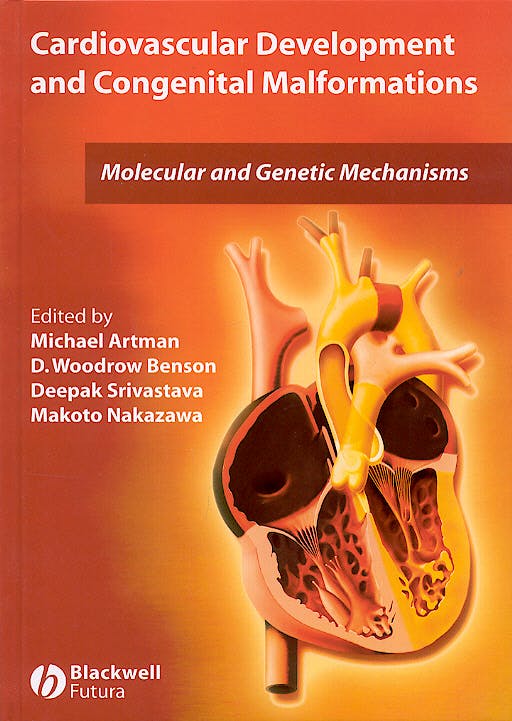 sistema circulatorio
Congenital cardiovascular malformations are the single most common form of birth defect. Therefore a better understanding of the mechanisms involved in both normal cardiac development and the formation of cardiovascular structural defects is of tremendous importance.

This book brings together the leading scientists from around the world who are actively engaged in studies of the etiology, morphogenesis and physiology of congenital cardiovascular diseases. A broad variety of approaches, techniques, experimental models and studies of human genetics combine to make this a truly outstanding and unique treatise on this pressing topic.

Cardiovascular Development and Congenital Malformations is divided into distinct categories, each focusing on a particular aspect of cardiovascular development. Sections are accompanied by editorial overviews which integrate new findings and place the information into a broader context.

4, Pleiotropic effects of Pitx2 isoform c on morphogenesis in the mammalian heart

Mechanisms of Cardiogenesis and Myocardial Development

9, Regulation of myocardium formation after the initial development of the linear heart tube

10, The Role of the extracellular matrix (ECM) in cardiac development

11, Teratogenic effects of bis-diamine on the developing myocardium

12, Proliferative responses to myocardial remodeling in the developing heart.

Formation of Endocardial Cushions and Valves

14, The endocardium as a unique modulator of in utero cardiovascular form and function.

20, Fgf10 and the embryological origin of outflow tract myocardium

22, Induction and Patterning of the Impulse Conducting Purkinje Fiber Network

23, Spatial Correlation of Conduction Tissue in the Ventricular Trabeculae of the Developing Zebrafish

24, Development of the cardiac conduction system and contribution of neural crest and epicardially derived cells

25, The Development of the Cardiac Conduction System: an old story with a new perspective

26, The role of calreticulin in cardiac development and function

28, Possible roles of the extracellular matrix in coronary vasculogenesis of mouse

31, The role of the transcriptional co-repressor FOG-2 in cardiac development

33, Tbx1 and DiGeorge syndrome: A genetic link between cardiovascular and pharyngeal development

34, New insights into the role of Tbx1 in the DiGeorge mouse model

37, TGF2 does not affect neural crest cell migration but is a keyplayer in vascular remodelling during embryogenesis

41, Imaging of heart development in embryos with magnetic resonance microscopy

49, Sarcolipin, a novel regulator of calcium cycling, is preferentially expressed in the murine and human atrium

51, A comprehensive model for O2 constriction in the human ductus arteriosus

52, Pharmacological Manipulation of the Fetal Ductus Arteriosus in the Rat

53, Constriction of Ductus Arteriosus by Selective Inhibition of Cyclooxygenase-1 and -2

54, Synergistic Constriction of Ductus Arteriosus by Indomethacin and Dexamethasone in Fetal Rats

55, Prevalence of Congenital Heart Diseases in the Czech Republic

60, Cardiovascular Anomalies in Patients with Deletion 22q11.2: A Multi-center Study in Korea

64, The genetic origin of atrioventricular conduction disturbance in humans

66, Missense Mutations in the PTPN11 as a Cause of Cardiac Defects associated with Noonan Syndrome

69, Mutation analysis of BMPR2 and other genes in Japanese patients with pediatric primary pulmonary hypertension