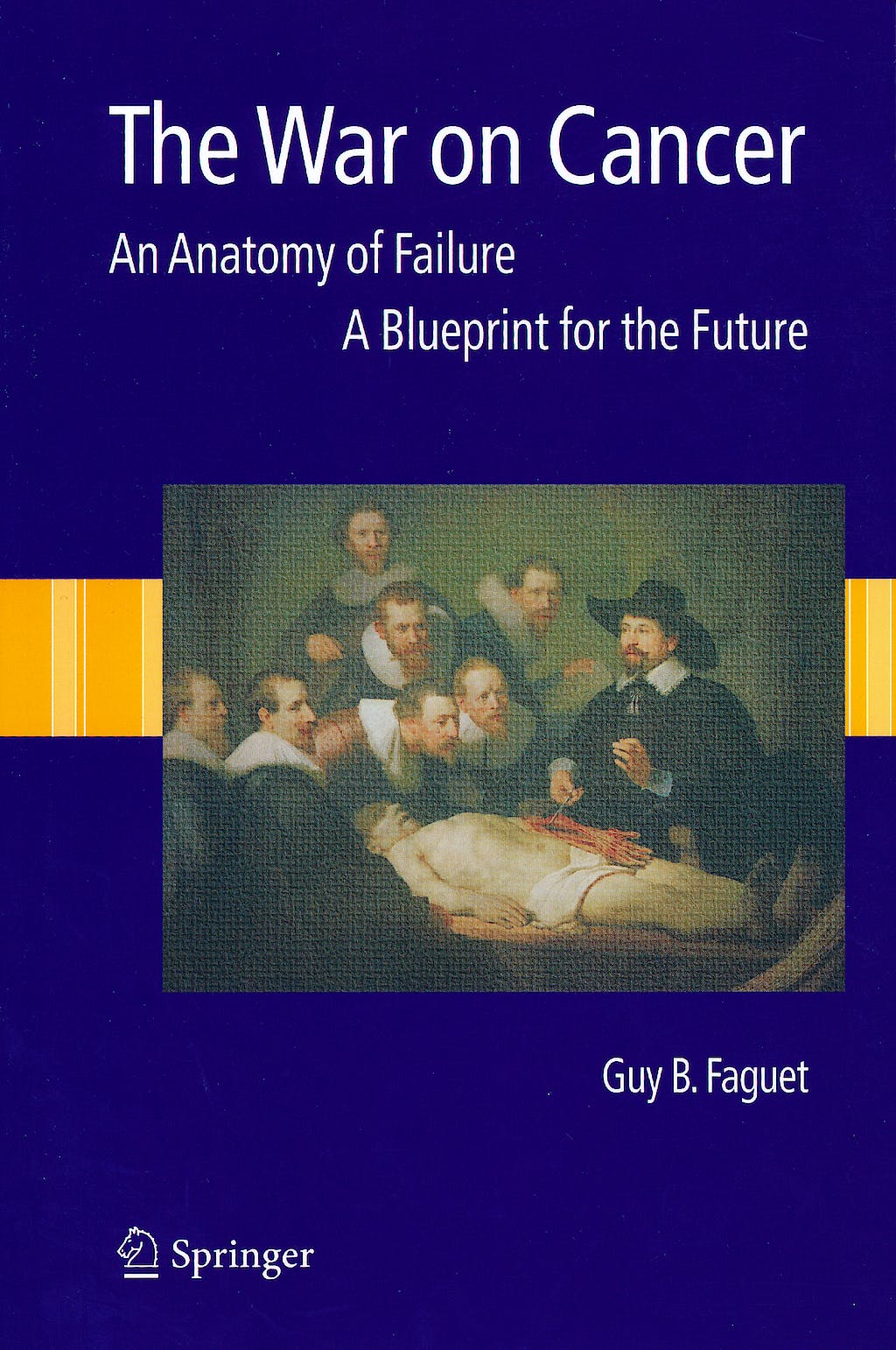 The War on Cancer. an Anatomy of Failure. a Blueprint for the Future

The National Cancer Act of 1971 propelled the War on Cancer, mainly by tapping the vast resources of the Federal government to confront the growing cancer challenge. As a result, all cancer initiatives funded by Federal dollars were channeled through a restructured National Cancer Institute and some predicted the conquest of cancer by the nation’s bicentennial. Yet, over the ensuing three decades progress in the clinical setting has been slow, and cancer remains a largely incurable disease.

After reviewing the history of cancer and its impact on the population, Dr. Faguet exposes the antiquated notions that have driven cancer drug development, documents the stagnation in treatment outcomes despite major advances in cancer genomics and growing NCI budgets, and identifies the multiple factors that sustain the status quo. He shows that, contrary to frequent announcements of breakthroughs, our current cancer control model cannot eradicate most cancers and the reasons why. Significantly, this book also delineates a way forward via a shift from the discredited cell-kill approach of the past to an integrated, evidence-driven cancer control paradigm based on prevention, early diagnosis, and pharmacogenomics. The author's views are based on data published in mainstream scientific journals and other reliable references, 432 of which are cited.

"I am quite impressed with the scope of the effort, the excellent writing, and the sharp and accurate critique over a broad area of modern oncology practice and research. Frankly, I am not aware of many scientists who could synthesize both the basic and clinical material, and lucidly depict the implications in such a compelling manner".
(Neil Caporaso, M.D., Chief, Pharmacogenetics Section, Genetic Epidemiology Branch, Division of Cancer Epidemiology and Genetics, National Cancer Institute, MD.)

"Dr Faguet's approach is not unlike an analysis of the so-called industrial military complex.…a complex consisting of the federal government, pharmaceutical drug companies and academia—all have a part of the pie and therefore a reason for maintaining the status quo. Insurance companies, regulatory agencies such as the FDA, and patients themselves add further layers of complexity. Faguet walks through all of these areas in a critical but unemotional manner... His book should be of interest to policy-makers, cancer-care workers, and the public at large".
(Gerald E. Marti, M.D., Ph.D. Chief, Flow and Image Cytometry Section, Laboratory of Stem Cell Biology, National Institutes of Health MD.)

"I think your book will be a valuable corrective to much of the hype that has been splashed around in greater and greater quantities by the cancer establishment as it tries to stifle the message that it has failed to make much of an impact"
(John C. Bailar, M.D., Ph.D., Former Deputy Associate Director for Cancer Control, National Cancer Institute; Former Editor-in-Chief of the Journal of the National Cancer Institute; Professor Emeritus, University of Chicago, IL.)

"The War on cancer is a trenchant and provocative book that offers a critical view of the last four decades in the field of oncology and a vision for the future. To the mainstream oncology community, I would commend it as a challenging treatise"
(Randall Hughes ,Journal of the American Medical Association, June 2006)

Part I Cancer Statistics: Some Facts

Part II What Is Cancer?

Part III How Is Cancer Treated?

Part IV Why Does This System Persist?

Part V Where Do We Go From Here?