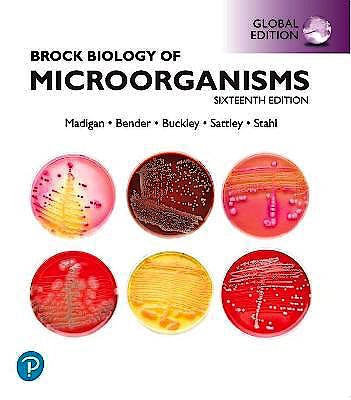 UNIT 1:THE FOUNDATIONS OF MICROBIOLOGY

4. Microbial Growth and Its Control

5. Viruses and Their Multiplication

9. Genetics of Bacteria and Archaea

10. Microbial Genomics and Other Omics

19. Taking the Measure of Microbial Systems

22. Microbiology of the Built Environment

Brock Biology of Microorganisms setsthe standard for accuracy, impeccable scholarship, a visually stunning art program,and the use of cutting-edge research to illustrate basic concepts. The textguides students through the six major themes of microbiology - Evolution, CellStructure and Function, Metabolic Pathways, Information Flow and Genetics,Microbial Systems, and the Impact of Microorganisms - as outlined by theAmerican Society for Microbiology Conference on Undergraduate Education(ASMCUE). This robust and modern approach takes students through the genomicsrevolution and "omics" maze that has transformed microbiology and sharespowerful tools that microbiologists use to probe deeper and further into themicrobial world than ever before.

The 16th Edition expands the extraordinary artprogram to ensure students experience microbiology as a visual science whileproviding an overview of the microbial world with basic principles thatstudents all need to master. Each chapter's theme focuses on a recent discoverythat connects students with the most current science and engages them withexciting, real-world topics.

Michael T. Madigan received his BS in Biologyand Education from Wisconsin State University-Stevens Point (1971) and his MS(1974) and PhD (1976) in Bacteriology from the University of Wisconsin-Madisonin the laboratory of Thomas Brock. Following a postdoc at Indiana Universitywith Howard Gest, Mike moved to Southern Illinois University Carbondale, wherehe taught courses in introductory microbiology and bacterial diversity as aprofessor of microbiology for 33 years. In 1988 Mike was selected as theOutstanding Teacher in the College of Science and in 1993, the OutstandingResearcher. In 2001 he received the SIUC Outstanding Scholar Award andDistinguished Professor title. In 2003 Mike received the Carski Award forDistinguished Undergraduate Teaching from the American Society forMicrobiology, and he is an elected Fellow of the American Academy ofMicrobiology. He has also been recognized by the American Red Cross as a majorvolunteer blood donor for the 24 gallons of blood he has donated since 1967.Mike's research is focused on phototrophic bacteria that inhabit extremeenvironments, and for the past 20 years his emphasis has been Antarcticmicrobiology. Mike has co-edited a major treatise on phototrophic bacteria andserved for 10 years as chief editor of the journal Archives ofMicrobiology. He currently serves on the editorial board of thejournals Environmental Microbiology and Antonie vanLeeuwenhoek. Mike's other interests include forestry, swimming, reading,and caring for his dogs and horses. He lives on a small farm near a quiet lakewith his wife, Nancy, three dogs (Kato, Nut, and Merlyn), and three horses(Eddie, Georgie, and Roscoe).

Kelly S. Bender received her BS in Biologyfrom Southeast Missouri State University (1999) and her PhD (2003) in MolecularBology, Microbiology, and Biochemistry from Southern Illinois UniversityCarbondale. Her dissertation research focused on the genetics ofperchlorate-reducing bacteria. During her postdoctoral fellowship, Kelly workedon the genetic regulation of sulfate-reducing bacteria in the laboratory ofJudy Wall at the University of Missouri-Columbia. She also completed atransatlantic biotechnology fellowship at Uppsala University in Swedenresearching regulatory small RNAs in bacteria. In 2006, Kelly returned to heralma mater, Southern Illinois University Carbondale, as an Assistant Professorin the Department of Microbiology and in 2012 was tenured and promoted toAssociate Professor. She has served as Chair of the SIUC Department ofMicrobiology since 2018. Her lab studies a range of topics including regulationin sulfate-reducing bacteria, the microbial community dynamics of sitesimpacted by acid mine drainage, and diversity of phototrophic heliobacteria.Kelly teaches courses in introductory microbiology and microbial diversity, hasserved on numerous federal grant review panels, and is an active member of theAmerican Society for Microbiology (ASM). Her other interests include spendingtime with her daughter, Violet, and husband, Dick.

Daniel H. Buckley is a Professor at CornellUniversity in the School of Integrative Plant Science and the Department ofMicrobiology. He earned his BS in Microbiology (1994) at the University ofRochester and his PhD in Microbiology (2000) at Michigan State University. Hisgraduate research in the laboratory of Thomas M. Schmidt explored environmentalfactors that influence microbial diversity in soils. Dan then received aNational Science Foundation Postdoctoral Fellowship to work with Pieter T.Visscher, University of Connecticut, investigating linkages between microbialdiversity and biogeochemistry within microbial mats and stromatolites. Danmoved to Cornell in 2003 where he investigates the ecology and evolution of thediverse microorganisms that live in soils. He has taught both introductory andadvanced courses in microbiology, microbial diversity, and microbial genomics.He received a National Science Foundation Faculty Early Career Development(CAREER) award in 2005 for excellence in integrating research and education,and served as Co-Director of the MBL Microbial Diversity summer course in WoodsHole, Massachusetts (2009-2013). He currently serves on the editorial boardsof Applied and Environmental Microbiology and EnvironmentalMicrobiology. Dan lives in Ithaca, New York, with his wife, Merry, andsons, Finn and Colin.

W. Matthew Sattley received his BA in Biologyin 1998 from Blackburn College (Illinois) and his PhD (2006) in MolecularBiology, Microbiology, and Biochemistry from Southern Illinois UniversityCarbondale. His graduate studies focused on the microbiology of sulfur cyclingand other biogeochemical processes in permanently ice-covered lakes ofAntarctica. In his postdoctoral research at Washington University in SaintLouis, he studied the physiology and genomics of anoxygenic phototrophicbacteria in Robert Blankenship's laboratory. Matt then accepted a facultyappointment to the Department of Biology at MidAmerica Nazarene University(Kansas), where he supervised undergraduate research and taught courses inmicrobiology, environmental science, and cell biology. In 2010, Matttransitioned to the Division of Natural Sciences at Indiana Wesleyan University(IWU), where he is a Professor of Biology and has served as the Director of theHodson Summer Research Institute, a faculty-led summer research program for undergraduatestudents in the Natural Sciences. Matt's research group investigates theecology, diversity, and genomics of bacteria that inhabit extreme environments,and in 2017, he was the recipient of IWU's Outstanding Scholarship Award. Mattis a member of the American Society for Microbiology (including its IndianaBranch) and the Indiana Academy of Science. Matt lives in Marion, Indiana, withhis wife, Ann, and sons, Josiah and Samuel. Outside of teaching and research,Matt enjoys playing drums, reading, motorcycling, and baseball.

David A. Stahl received his BS degree inMicrobiology from the University of Washington, Seattle, and completed graduatestudies in microbial phylogeny and evolution with Carl Woese in the Departmentof Microbiology at the University of Illinois at Urbana-Champaign. Subsequentwork as a postdoctoral fellow with Norman Pace, then at the National JewishHospital in Colorado, involved early applications of 16S rRNA-based sequenceanalysis to the study of natural microbial communities. In 1984 Dave joined thefaculty at the University of Illinois with appointments in Veterinary Medicine,Microbiology, and Civil Engineering. In 1994 he moved to the Department ofCivil Engineering at Northwestern University, and in 2000 returned to theUniversity of Washington as professor in the Departments of Civil andEnvironmental Engineering and Microbiology. Dave is known for his work inmicrobial evolution, ecology, and systematics, and received the 1999 BergeyAward and the 2006 ASM Procter & Gamble Award in Applied and EnvironmentalMicrobiology. Dave is an elected fellow of the American Academy of Microbiologyand a member of the National Academy of Engineering. His main researchinterests surround the biogeochemistry of nitrogen and sulfur and the microbialcommunities that sustain the associated nutrient cycles. His laboratory was thefirst to culture ammonia-oxidizing Archaea, a group believedto be the key mediators of this process in the nitrogen cycle. Dave has taughtseveral courses in environmental microbiology, was one of the founding editorsof the journal Environmental Microbiology, and has served on manyadvisory committees. Outside the lab, Dave enjoys hiking, bicycling, spendingtime with family, reading a good science fiction book, and - with his wife, Lin- renovating an old farmhouse on Bainbridge Island.