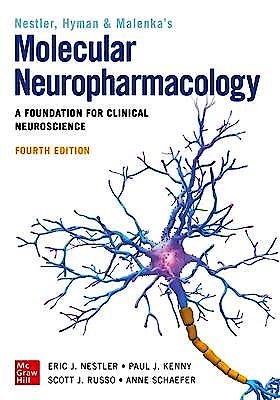 This popular primer provides a solid understanding of the nervous system, neurologic disorders, and treatments with drugs and other substances.

Nestler, Hyman, and Malenka's Molecular Neuropharmacology, Fourth Edition covers everything you need to know about molecular neuroscience. This meticulously detailed guide provides a deep dive into the pathophysiology of neurologic and psychiatric disorders by describing neuropharmacological fundamentals of the nervous system. Packed with tables, diagrams, and figures making the intricacies of neurochemistry easy to understand, it builds a solid understanding of major disease mechanisms by reviewing the effects of drug actions (organized by drug category), and it explains the neuropharmacology of specific neural and psychiatric disorders. Concise overviews of the effects of drugs and neurologically active substances appear before the descriptions of the minute details that lead to these effects-a format designed to boost understanding and knowledge retention of critical concepts.

Eric J. Nestler, MD is Professor and Chairman of the Department of Psychiatry and the Center for Basic Neuroscience at the Southwestern Medical School, Graduate School of Biomedical Sciences, Dallas Texas. He is also the Lou and Ellen McGinley Distinguished Chair in Psychiatric Research. The goal of Dr. Nestler's research is to better understand the ways in which the brain responds to repeated perturbations under normal and pathological conditions. A major focus of the research is drug addiction: to identify molecular changes that drugs of abuse produce in the brain to cause addiction, and to characterize the genetic and environmental factors that determine individual differences in the ability of the drugs to produce these changes. A related interest is to understand the contribution of the brain's reward regions to the regulation of normal mood as well as the abnormalities in mood and motivation seen in depression. Dr. Nestler has authored or edited 5 books, and has authored or co-authored 180 original research articles and 90 review articles and book chapters. He currently mentors seven post-doctoral fellows and six graduate students. He has trained 27 post-doctoral researchers, eight research track residents, and ten graduate students. Dr. Nestler is the recipient of numerous awards and honors, including the Pfizer Scholars Award (1987), Sloan Research Fellowship (1987), McKnight Scholar Award (1989), Efron Award of the American College of Neuropsychopharmacology (1994), and Pasarow Foundation Award for Neuropsychiatric Research (1998). He has served on the Board of Scientific Counselors of the National Institute on Drug Abuse, and currently serves on the Scientific Advisory Boards of the National Alliance for Research in Schizophrenia and Depression and of the National Alliance for Autism Research. Dr. Nestler is also a member of the National Advisory Mental Health Council, the Council of the Society for Neuroscience, and the Council of the American College of Neuropsychopharmacology.

Steven E. Hyman, MD is Provost of Harvard University and Professor of Neurobiology at Harvard Medical School, Boston, MA. From 1996 to 2001, he served as Director of the National Institute of Mental Health (NIMH), the component of the US National Institutes of Health charged with generating the knowledge needed to understand and treat mental illness. Before serving as Director of NIMH, Dr. Hyman was Professor of Psychiatry at Harvard Medical School, Director of Psychiatry Research at Massachusetts General Hospital , and the first faculty Director of Harvard University's Mind, Brain, and Behavior Initiative. In the laboratory he studied the molecular biology of neurotransmitter action. Dr. Hyman is a member of the Institute of Medicine of the National Academy of Sciences and of the American Academy of Arts and Sciences. He is currently serves as Editor of the Annual Review of Neuroscience. He received his BA from Yale College in 1974 summa cum laude, and his MA from the University of Cambridge in 1976, which he attended as a Mellon fellow studying the history and philosophy of science. He earned his MD from Harvard Medical School in 1980..

Robert C. Malenka, MD, PhD is Pritzker Professor of Psychiatry & Behavioral Sciences at Stanford University, Palo Alto, CA. He is a fellow of the American Academy of Arts and Sciences, a member of the Institute of Medicine of the National Academies and an Associate of the Neurosciences Research Program. He has won several awards including the International Prize in Neuroscience, the Distinguished Alumni Award from Stanford University and the Daniel Efron Award from the American College of Neuropsychopharmacology. A major goal of his laboratory is to elucidate both the specific molecular events that are responsible for the triggering of these various forms of synaptic plasticity and the exact modifications in synaptic proteins that are responsible for the observed, long-lasting changes in synaptic efficacy.