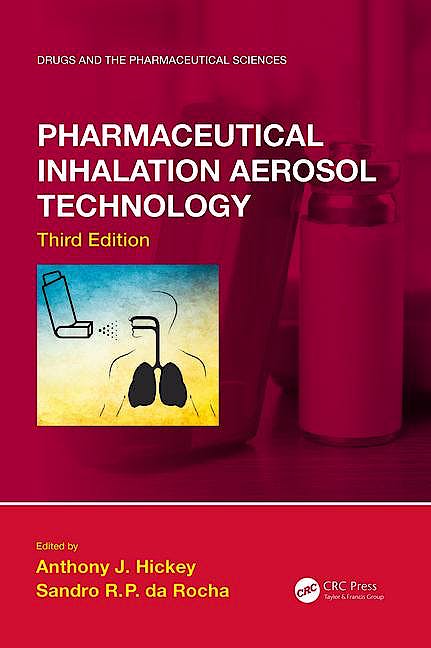 This fully revised and updated third edition of Pharmaceutical Inhalation Aerosol Technology encompasses the scientific and technical foundation for the rationale, design, componentry, assembly and quality performance metrics of therapeutic inhalers in their delivery of pharmaceutical aerosols to treat symptoms or the underlying causes of disease. It focuses on the importance of pharmaceutical engineering as a foundational element of all inhaler products and their application to pulmonary drug delivery. The expanded scope considers previously unaddressed aspects of pharmaceutical inhalation aerosol technology and the patient interface by including aerosol delivery, lung deposition and clearance that are used as measures of effective dose delivery.

Dr. Hickey is a Distinguished Fellow at the Research Triangle Institute, Emeritus Professor of Molecular Pharmaceutics of the Eshelman School of Pharmacy (2010-present, Professor 1993-2010) and Adjunct Professor Biomedical Engineering in the School of Medicine, at the University of North Carolina at Chapel Hill. He obtained Ph.D. (1984) and D.Sc. (2003) degrees in pharmaceutical sciences from Aston University, Birmingham, UK. Following postdoctoral positions, at the University of Kentucky (1984-1988) Dr. Hickey joined the faculty at the University of Illinois at Chicago (1988-1993). In 1990 he received the AAPS Young Investigator Award in Pharmaceutics and Pharmaceutical Technology. He is a Fellow of the Royal Society of Biology (2000), the American Association of Pharmaceutical Scientists (2003) and the American Association for the Advancement of Science (2005). He is the founder (1997, and formerly President and CEO, 1997-2013) of Cirrus Pharmaceuticals, Inc., which was acquired by Kemwell Pharma in 2013; founder (2001, and formerly CSO, 2002-2007) of Oriel Therapeutics, Inc, which was acquired by Sandoz in 2010 and founder and CEO of Astartein, Inc. (2013-present); member of the Pharmaceutical Dosage Forms Expert Committee of the United States Pharmacopeia (USP, 2010–2015, Chair of the sub-committee on Aerosols) and formerly Chair of the Aerosols Expert Committee of the USP (2005-2010). Dr. Hickey conducts a multidisciplinary research program in the field of pulmonary drug and vaccine delivery for treatment and prevention of a variety of diseases.

Dr. da Rocha is an Associate Professor of Pharmaceutics in the School of Pharmacy, holds a joint appointment in Chemical and Life Science Engineering, and is also a member of the Massey Cancer Center at Virginia Commonwealth University (VCU). He obtained his Ph.D. in 2000 from the University of Texas at Austin in Chemical Engineering. After a postdoctoral position in Chemistry and Biochemistry also at the University of Texas at Austin, Dr. da Rocha joined the faculty at Wayne State University in Detroit, MI, where he worked until 2015. Prof. da Rocha has provided significant contribution to the area of pulmonary drug delivery, particularly through the development of novel pressurized metered dose inhaler formulations and of nanotherapeutics for pulmonary drug delivery, both areas having potential applications in the treatment of a variety of pulmonary disorders. Prof. da Rocha has written a number of manuscripts, book chapters, and disclosed several technologies with his collaborators (visiting faculty, postdoctoral fellows, Ph.D., undergraduate, graduate and high-school students), many of them now working in the industry and government in areas related to pulmonary drug delivery. Prof. da Rocha is the School of Pharmacy Director for the Pharmaceutical Engineering Program at VCU.