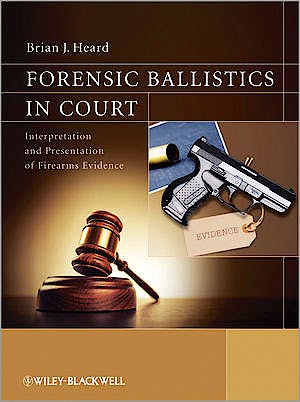 Forensic Ballistics in Court: Interpretation and Presentation of Firearms Evidence is an accessible introduction to firearms and ballistics evidence and how this is analysed and presented as evidence in a court of law.

The book contains little or no coverage of the history and development of weapons, ammunition and forensic technologies but rather approaches the subject in terms of the realities of case work.

Opening with a clear explanation of the correct nomenclature for various weapon types and their parts, illustrations help to clarify the names of the various components of these weapons. Ammunition is also extensively covered, again with annotated illustrations. Basic external and terminal ballistics, wounding capabilities are likewise covered to give an overview of the subject. The book is not intended to provide a detailed examination of all aspects of firearms and ballistics and should the reader need more detail on the subject reference is made to ‘The Handbook of Firearms and Ballistics’ also authored by Brian Heard.

A key aspect of the book covers the theory and philosophy behind striation matches and the associated statistics, how positive matches should be peer reviewed and the importance accreditation has on this subject.

Gunshot residue formation and identification and the various methods used in its analysis are reviewed in depth. This includes a critical examination of the pros and cons of each type of examination and the evidential weight which can be applied to each method. This type of analysis, due to the extremely small particles involved, is very susceptible to contamination, both environmental and cross contamination from police officers or other investigating agencies e.g. during exhibit photography or the taking of fingerprints.

As the main thrust of the book is directed towards the interpretation and assessment of the weight of evidence presented at court this will take up the major portion of the book. There will be considerable reliance on case work that the author has dealt with over the past 40 years to illustrate the various pitfalls of placing too much reliance on the face value of the various types of evidence. The majority of evidence presented at court can be interpreted in various ways and each and every one should be explored before deciding which is the more viable.

Key Differences between the proposed book and the Handbook for Firearms and Ballistics:

The importance of witness and accused statements and their interpretation in relation to the investigation under review will also be examined. This is not covered in the Handbook of Firearms and Ballistics.