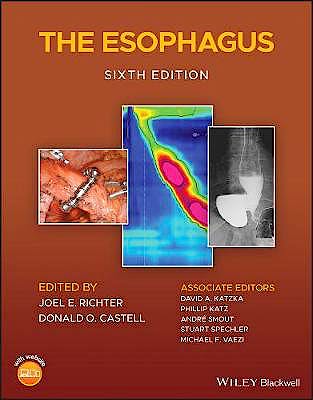 The Esophagus investigates the anatomy, physiology, and pathology of the esophagus. This sixth edition, revised and updated throughout, also explores the diagnosis and treatment of various esophageal conditions. It includes treatment guidelines approved by the two largest gastroenterology societies, the ACG and AGA, as befits a work co-edited by two former presidents of those organizations. Advancements in diagnostics are presented, as are developments in the surgical and drug therapies.

Presented in full colour, and boasting an unrivalled team of editors and contributing authors, The Esophagus Sixth Edition will find a home wherever the anatomy, physiology, and pathology of the esophagus are studied and taught.

This book is accompanied by a website containing all the figures from the book in PowerPoint format. ww.wiley.com/go/richter/esophagus6e

“There is absolutely no doubt that this edition of the textbook will maintain its status as the go-to reference for esophageal conditions, and will remain a highly utilized and clinically useful resource for novice and experienced physicians and surgeons alike.” (Gastroenterology, 1 July 2013)

Donald Castell MD is Professor of Medicine and Director of the Esophogeal Disorders Program at the Medical University of South Carolina in Charleston. He served as President of the American Gastroenterological Association from 1998 - 1999. Dr. Castell is internationally recognized as a leading authority on diseases of the esophagus and esophageal function, and has authored or co-authored more than 500 scientific publications. Amongst other books, Dr Castell has been the editor of all 4 previous editions of The Esophagus.

Joel E. Richter, MD, is Richard L. Evans Professor of Medicine and Chair, Department of Medicine, Temple University School of Medicine, Philadelphia. Dr. Richter is a past president of the American College of Gastroenterology and served as director, ACG, Institute for Clinical Research and Education from 1995 to 2004. From 2002 to 2003, he served as president of the World Organization for Specialized Studies on Diseases of the Esophagus. Dr. Richter is the author of more than 250 original papers, 114 editorials/reviews, and 101 book chapters. He is co-editor in chief for the American Journal of Gastroenterology, and is one of the editors of the forthcoming Wiley-Blackwell book, Textbook of Clinical Gastroenterology and Hepatology. He has been author or editor of 11 books.