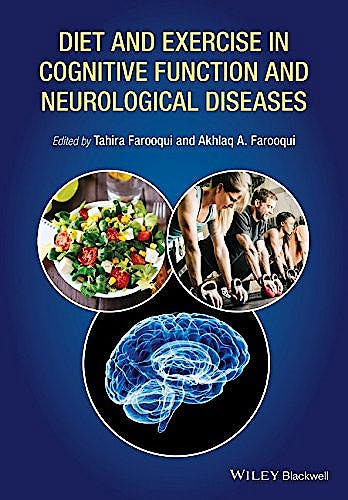 Diet and Exercise in Cognitive Function and Neurological Diseases

Diet and exercise have long been recognized as important components of a healthy lifestyle, as they have a great impact on improving cardiovascular and cerebrovascular functions, lowering the risk of metabolic disorders, and contributing to healthy aging. As a greater proportion of the world’s population is living longer, there has been increased interest in understanding the role of nutrition and exercise in long-term neurological health and cognitive function.

Diet and Exercise in Cognitive Function and Neurological Diseases discusses the role and impact that nutrition and activity have on cognitive function and neurological health. The book is divided into two sections. The first section focuses on diet and its impact on neurobiological processes. Chapters focus on the impacts of specific diets, such as the Mediterranean, ketogenic and vegan diets, as well as the role of specific nutrients, fats, fatty acids, and calorie restriction on neurological health and cognitive function. The second section of the book focuses on exercise, and its role in maintaining cognitive function, reducing neuroinflammatory responses, regulating adult neurogenesis, and healthy brain aging. Other chapters look at the impact of exercise in the management of specific neurological disorders such Multiple Sclerosis and Parkinson’s Disease.

Diet and Exercise in Cognitive Function and Neurological Diseases is a timely reference on the neurobiological interplay between diet and exercise on long-term brain health and cognitive function.

4 Effect of a Mediterranean Diet on Mental and Physical Quality of Life 39
Marialaura Bonaccio, Giovanni de Gaetano, and Licia Iacoviello

6 Levels of n-3 Fatty Acids and their Metabolites in the Brain: Their Impact on Brain Function and Neurological Disorders 59
Akhlaq A. Farooqui and Tahira Farooqui

9 Contribution of Diet and Exercise in the Pathogenesis of Major Depression 93
Adrian L. Lopresti

11 The Effect of Western Diet on Cognition in Humans 111
Heather M. Francis and Richard J. Stevenson

20 Role of Sleep in Cognition, Immunity, and Disease and Its Interaction with Exercise 225
Mark R. Zielinski and Dmitry Gerashchenko

22 Effect of Exercise on the Aging Brain 253
Bonita L. Marks

23 The Effects of Exercise on Neuronal Survival 267
Michael J. Chen

25 Research Issues and Clinical Implications of Exercise Effects in the Treatment of Depressive and Anxiety Disorders 295
A. Garrett Hazelton, Richard Bloch, and Sy Saeed

28 Summary, Perspective, and Direction for Future Studies 339
Tahira Farooqui and Akhlaq A. Farooqui