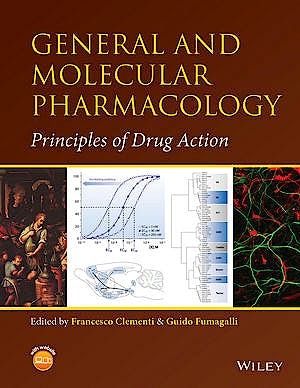 With a focus on functional relationships between drugs and their targets, this book covers basic and general pharmacology, from a cellular and molecular perspective, with particular attention to the mechanisms of drug action – the fundamental basis for proper clinical use- without neglecting clinical application, toxicology and pharmacokinetics.

2 A short history of pharmacology
V. Sironi
Birth and historical developments of pharmacology
Modern pharmacology
The biotechnology era and the pharmacology in the third millennium
2.1 The drugs of the ancients
2.2 Ehrlich’s chemotherapy: receptor theory and clinical experimentation
2.3 The thalidomide case

SECTION 2 GETTING THE DRUG TO ITS SITE OF ACTION

15 Integration in intracellular transduction of receptor signals
Jacopo Meldolesi
Dualism of receptors in the nucleus and in the cytoplasm
Heterogeneity of receptor assembly
Transduction cascades depend on cross-talk and complementarity among receptors
Development of new drugs and therapies
15.1 Neurotrophins
15.2 Wnt and Hedgehog signaling pathways: two future drug targets?

54 Preclinical Research and development of new drugs
E. Ongini
Technological innovation and scientific knowledge in today pharmaceutical research
The research strategies
The research stages
The development stages
The drugs in 2020
54.1 The significant contribution given by small research groups (start-ups and spin-offs)
54.2 High-throughput screening
54.3 The beginning of a project on a new drug
54.4 The patent
54.5 Biotech drugs
54.6 Toxicology tests
54.7 Safety pharmacology: how to evaluate whether a new molecule will cause side effects on vital functions

Francesco Clementi is a Professor Emeritus of Pharmacology at the University of Milan. He has been President of several national and international societies and is member of the Accademia dei Lincei, the prestigious Academy of Italian Sciences. He authored over 200 publications dealing with neurotransmitter receptors and co-edited several books on neuropharmacology and cell biology including all four editions of the Italian language version of this book,Farmacologia Generale e Molecolare.

Guido Fumagalli has been the Dean of Faculty Director of the PhD School of Translational Medicine, Vice-Provost for Research, and Vice-Provost for International Affairs at the University of Verona. He has over 80 publications in international journals to his credit along with numerous books on pharmacology and sports science