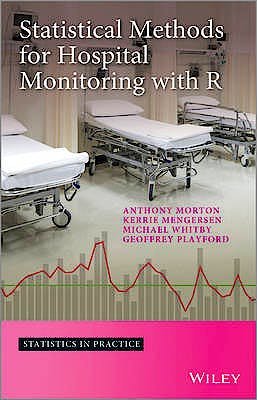 Hospitals monitoring is becoming more complex and is increasing both because staff want their data analysed and because of increasing mandated surveillance. This book provides a suite of functions in R, enabling scientists and data analysts working in infection management and quality improvement departments in hospitals, to analyse their often non-independent data which is frequently in the form of trended, over-dispersed and sometimes auto-correlated time series; this is often difficult to analyse using standard office software.

This book provides much-needed guidance on data analysis using R for the growing number of scientists in hospital departments who are responsible for producing reports, and who may have limited statistical expertise.

This book explores data analysis using R and is aimed at scientists in hospital departments who are responsible for producing reports, and who are involved in improving safety. Professionals working in the healthcare quality and safety community will also find this book of interest

Introduction.
Overview and rationale for this book
Motivation for this book
Why R?
Other reading for R
What methods are covered in this book?
Structure of his book
Using R
Entering data
Dates
Dates, important note and chron()
Exporting data
Further notes
Charts introduction
When there is no date column
Control Chart Menu