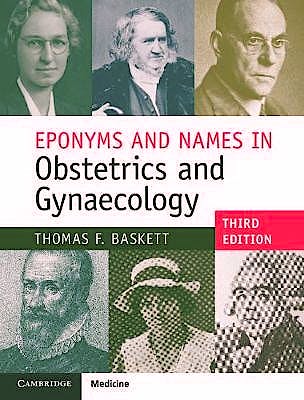 Eponyms and Names in Obstetrics and Gynaecology

About the author
Preface
Acknowledgements
Image credits
A-Z of eponyms and names in obstetrics and gynaecology
Index.

Few specialties have a longer or richer eponymous background than obstetrics and gynaecology. Eponyms add a human side to an increasingly technical profession and represent the historic tradition and language of the speciality. This collection aims to perpetuate the names and contributions of pioneers and offer introductory profiles to the founders in whose steps we follow. This third edition includes 26 new entries, as well as expanded detail, illustration and quotation for existing entries. Biographical data and historical and medical context are discussed for each of the 391 names, with reference to 34 countries, reflecting the field's far reaching origins. More than 1700 original references feature, alongside an extensive bibliography of more than 2500 linked references to assist readers searching for more detailed information. This is a volume for physicians, midwives, medical historians, medical ethicists and all those interested in the history and evolution of obstetrical and gynaecological treatment.