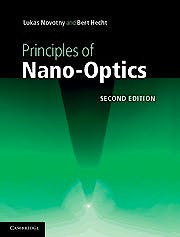 First published in 2006, this book has become the standard reference on nano-optics. Now in its second edition, the text has been thoroughly updated to take into account new developments and research directions. While the overall structure and pedagogical style of the book remain unchanged, all existing chapters have been expanded and a new chapter has been added. Adopting a broad perspective, the authors provide a detailed overview of the theoretical and experimental concepts that are needed to understand and work in nano-optics, across subfields ranging from quantum optics to biophysics. New topics of discussion include: optical antennas; new imaging techniques; Fano interference and strong coupling; reciprocity; metamaterials; and cavity optomechanics. With numerous end-of-chapter problem sets and illustrative material to expand on ideas discussed in the main text, this is an ideal textbook for graduate students entering the field. It is also a valuable reference for researchers and course teachers.

Lukas Novotny, University of Rochester, New York and ETH Zürich, Switzerland
Lukas Novotny is Professor of Optics and Physics at the University of Rochester where he heads the Nano-Optics Research Group at the Institute of Optics. He received his Ph.D. from the Swiss Federal Institute of Technology in Switzerland and later joined the Pacific Northwest National Laboratory (Washington, USA) as a research fellow, working in the Chemical Structure and Dynamics Group. In 1999, he joined the faculty of the Institute of Optics at the University of Rochester and developed a course on nano-optics which has been taught several times at the graduate level and which forms the basis of this textbook. His general interest is in nanoscale light-matter interactions ranging from questions in solid-state physics to biophysics.

Bert Hecht, Julius-Maximilians-Universität Würzburg, Germany
Bert Hecht is Professor of Experimental Physics at the University of Würzburg. After studying physics at the University Konstanz, he joined the IBM Zurich Research Laboratory in Rüschlikon and worked in near-field optical microscopy and plasmonics. In 1996 he received his Ph.D. from the University of Basel and then joined the Physical Chemistry Laboratory of the Swiss Federal Institute of Technology where he worked on the combination of single-molecule spectroscopy with scanning probe techniques. In 2001, he was awarded a Swiss National Science Foundation research professorship at the University of Basel. His research interests comprise the enhancement of light-matter interaction on the nanometerscale.