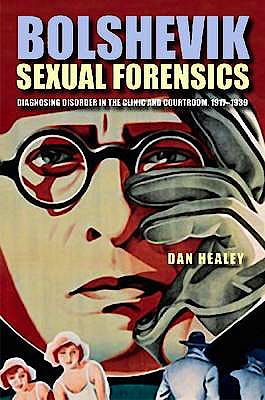 Bolshevik Sexual Forensics. Diagnosing Disorder in the Clinic and Courtroom 1917-1939

In an effort to modernize criminal and civil investigations, early Bolsheviks gave forensic doctors - most of whom had been trained under the tsarist regime - new authority over issues of sexuality. Revolutionaries believed that forensic medicine could provide scientific and objective solutions to sexual disorder in the new society. "Bolshevik Sexual Forensics" explores the institutional history of Russian and Soviet forensic medicine and examines the effects of its authority when confronting sexual disorder. Healey compares sex crime investigations from Petrograd and Sverdlovsk in the 1920s to the numerous publications by forensic doctors and psychiatrists of the prerevolutionary and early Soviet periods to illustrate the role that these specialists played. In addition, Healey presents a fascinating look at how doctors diagnosed and treated hermaphroditism, showing how Soviet physicians revolutionized the standard scientific view in these cases by taking into account individual desire. This study sheds light on unexplored radical and reactionary forces that shaped the Bolshevik 'sexual revolution' as lawmakers defined new ways of seeing sexual crime and disorder. Forensic doctors struggled to interpret the replacement of the age of consent with a standard of 'sexual maturity,' a designation that made female sexuality a collective 'resource,' not part of an individual's personality. 'Innocence,' 'experience,' and virginity played a major role in the expertise doctors furnished in rape and abuse trials. Psychiatrists recoiled from the language of sexual psychology in their investigations of sex criminals. Yet in the clinic, Soviet physicians probed the desires of the two-sexed citizen, whose psychology served as the basis for a distinctly modern approach to the 'erasure' of the hermaphrodite. Healey concludes that the vision of men and women as equals after a 'sexual revolution' was undermined from the outset of the Soviet experiment. Law and medicine failed to protect women and girls from violence, and Soviet medicine's physiological and biological model of sexual citizenship erased the vision of sexual self-expression, especially for women. This groundbreaking study will appeal to Soviet historians and those interested in gender studies, sexuality, medicine, and forensics. It offers an enlightening view of Bolshevik forensic medicine and the 'sexual revolution'.

"A meticulously researched, well-written and consistently interesting work... virtually the first to engage in 'grass roots' research, looking at unpublished court documents to determine how notions of sexuality were applied in courts dealing with sex crimes." - Eric Naiman, University of California, Berkeley"

DAN HEALEY is a senior lecturer in the Department of History, Swansea University (Wales, UK). He is the author of Homosexual Desire in Revolutionary Russia: The Regulation of Sexual and Gender Dissent and articles on the history of gender, sexuality, and medicine in Russia.