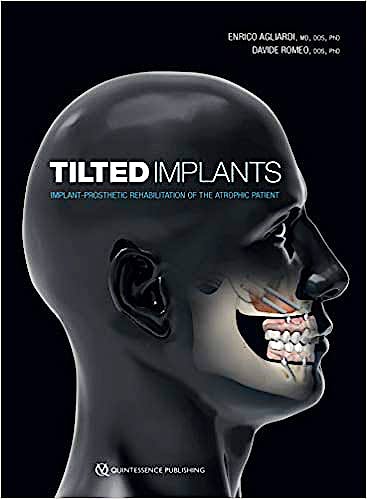 When presented with atrophic arches, clinicians often turn to invasive techniques such as bone grafting or maxillary sinus
augmentation. However, using tilted implants instead can avoid these aggressive procedures, allowing the implant support to be moved posteriorly and for longer implants to be chosen. The implants can be loaded immediately to support a full-arch fixed prosthesis in multiple configurations, such as All-on-4, transsinus implants, zygomatic implants, or the authors' signature V-II-V technique.

This book first presents the science and clinical evidence behind the various protocols using tilted implants, then proceeds to discuss patient evaluation, diagnostics, and planning before diving into the methods themselves. Procedures are discussed separately for each arch, highlighted by dozens of clinical cases representing a diverse range of initial situations.

In addition to the surgical protocols, methods for fabricating provisional and definitive prostheses are laid out with each step illustrated and explained. This comprehensive volume truly covers everything a clinician needs to know to use tilted implants with great success for their patients.

Enrico Agliardi
Dr Agliardi graduated with honors from the University of Milan in 1994, specializing in medicine and surgery. At the same university, he attained a specialization in maxillofacial surgery in 2000 and a specialization in orthodontics in 2005. Since 2009, Dr Agliardi has been in charge of the Special Rehabilitation Surgery department at the Department of Dentistry of IRCCS San Raffaele of Milan, and he is also a professor in the Special Rehabilitation Surgery Department at Vita-Salute San Raffaele University. For over 15 years, he has been involved in the implant-prosthetic rehabilitation of compromised patients with tilted and zygomatic implants.

Davide Romeo
Dr Romeo graduated with honors from the University of Milan in 2005, specializing in dentistry and dental prosthetics and with a thesis on the clinical efficacy of the All-on-4 protocol. He later obtained a doctorate from research in innovative techniques in oral implantology and implant-prosthetic rehabilitation, attending the dental clinic of the Galeazzi Institute of Milan before completing a year of study in periodontology at the Department of Periodontology and Implantology at New York University. He has been collaborating with Dr Enrico Agliardi for 14 years, carrying out clinical and research activities on immediate and partial and complete rehabilitations.