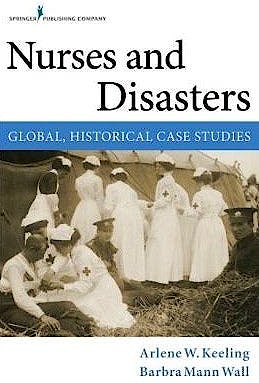 Nursing and Global Disasters. A History of Collaboration

Analyses the collaborative nursing response to a variety of global disasters that occurred between 1908 and 2012. The discuses the transnational character of disaster response, and examines how these transnational partnerships developed, their implications for policy, and how we can use lessons learned to improve care in the future.

This timely volume describes and analyzes the collaborative nursing response to a variety of historic and recent global disasters that occurred between 1908 and 2012, including Hurricane Sandy. The book is unique in its discussion of the trans-national character of disaster response regarding the mobilization of individuals across national borders and continents. It examines how these transnational partnerships developed, their implications for policy, and how we can use lessons learned to improve care in the future.

The book addresses such questions as: How did local, regional, and national communities mobilize for emergency care? What was the role of local nurses in emergency care after disasters? What was the role of the national or international Red Cross, local and federal government, physicians, nurses, and other first responders? What was the impact of social attitudes and issues of race, class, and gender on the ways nurses and other health care professionals reacted to the disasters? How did food shortages and food insecurity, and /or violence reshape health care goals? How did unpreparedness for the type or scope of the disaster affect the response? How can our ideas about trans-national exchange and/or transformation of health care knowledge be enhanced when nurses from across the globe contribute their experiences to the disaster response? The book will be of value to a wide variety of undergraduate and graduate students in nursing, social work, history, health policy, women's studies, public health, and urban studies.

Barbra Mann Wall, PhD, RN, FAAN is a nurse historian known for her studies on women and health care institutions and for her focus on Catholic hospitals and oral histories of retired nurses. Her recent work addresses the history of disaster nursing in the Southwest and the way people interpret disasters of the past. She is Associate Professor and Associate Director, Barbara Bates Center for the Study of the History Nursing, University of Pennsylvania School of Nursing, USA, with previous faculty positions at Purdue and Duke Universities. She is widely published, with 19 refereed journal articles and two books, one of which, Unlikely Entrepreneurs: Catholic Sisters and the Hospital Marketplace, won the 2006 Lavinia Dock Award for Best Book, American Association for the History of Nursing (AAHN). Her newest book is American Catholic Hospitals: A Century of Changing Missions and Markets. Dr. Wall presents at major international and national nursing and women's research meetings and is the recipient of numerous research and program grants, from five to six figures.

Arlene W. Keeling, PhD, RN, FAAN is the Centennial Distinguished Professor of Nursing and directs the Eleanor Crowder Bjoring Center for Nursing Historical Inquiry at the University of Virginia, USA. She also chairs the Department of Acute and Specialty Care. She is immediate Past President of the American Association for the History of Nursing and now second Vice President. Dr. Keeling is widely published with 26 peer-reviewed journal articles, two books, and 11 book chapters, along with numerous book reviews and commentaries. In 2007, she received the Lavinia Dock Award (AAHN) for her book Nursing and the Privilege of Prescription. Most recently she was author of The Nurses of Mayo Clinic (Mayo Clinic), and co-edited Nursing Rural America(Springer). She is the recipient of numerous research grants. A noted academic, Dr. Keeling presents internationally at major nursing and historical meetings.