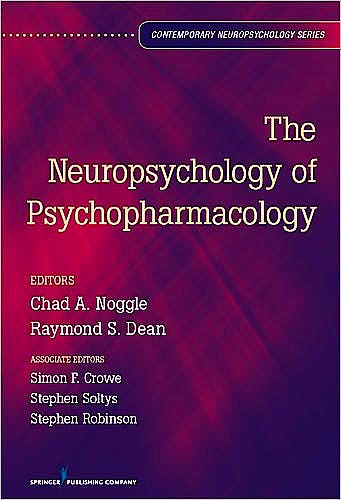 The Neuropsychology of Psychopharmacology

The use of pharmacological interventions to treat the symptoms of psychological disorders is readily becoming the first-line option for clinicians and their clients. Although most neurological and psychiatric professionals are well versed in medicinal agents, many remain uninformed about current pharmacologic practices that may have positive or negative neuropsychological impact. This text serves as an up-to-date reference for clinicians and researchers, covering current practices and advances in pharmacological interventions for psychiatric and neurological presentations and the pharmacologic mechanisms that influence the actions of the central nervous system and behavioral outcomes.

Chad A. Noggle, PhD, is Assistant Professor of Clinical Psychiatry at Southern Illinois University School of Medicine. He completed an internship in Neuropsychology through the BSU Consortium and a two-year post-doctoral residency at the Indiana Neuroscience Institute at St. Vincent's Hospital with specialization in Pediatric and Adult/Geriatric Neuropsychology. He is co-editor of The Encyclopedia of Neuropsychological Disorders, also to be published through Springer Publishing Company as well as the co-editor of the Contemporary Neuropsychology series. To date, Dr. Noggle has published more than 200 articles, book chapters, encyclopedia entries, and research abstracts and has made over 80 presentations at national and international conferences in neuropsychology. He currently serves as a reviewer for a number of neuropsychology journals. Dr. Noggle is a member of the American Psychological Association (Divisions 40, 5, &16), National Academy of Neuropsychology, and International Neuropsychological Society. He is a licensed Psychologist in both Illinois and Indiana.

Simon F. Crowe, Ph.D, is Professor in the School of Psychology at La Trobe University in Australia, with joint appointments in the areas of Clinical Neuropsychology and Biological Psychology. He is the author/co-editor of two books and over 100 book chapters and journal articles. His main research activities are in the biological basis of memory formation and the neuropsychology of psychiatric disorders.

Stephen M. Soltys, M.D., is chair of the Department of Psychiatry at Southern Illinois University Medical School. His research interests included disruptive behavior disorders and health policies. He has published his research in such publications as Journal of the American Academy of Child & Adolescent Psychiatry, Child Psychiatry and Human Development, American Journal of Psychiatry, Journal of Emotional and Behavioral Disorders, and Academic Medicine.