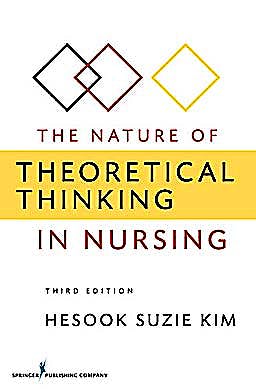 The Nature of Theoretical Thinking in Nursing

The past decade has seen tremendous growth and enrichment in nursing's theoretical work. This third edition has therefore been updated, revised, and expanded to cover the gamut of recent developments in theoretical thinking in nursing. This book presents a systematic framework that can be used to examine elements in the field of nursing and posits important concepts that have emerged in the field.

The chapters help to enhance readers' understanding about how conceptualizations and theoretical statements are developed and refined in nursing while simultaneously offering a typology of conceptual domains that can be used to delineate theoretical elements essential to nursing. This third edition retains the previous typology of four domains: the domain of client, the client-nurse domain, the domain of practice, and the environment domain.

Hesook Suzie Kim, PhD, RN, has been professor at the University of Rhode Island since 1979 and Professor II at the Institute of Nursing Science, Faculty of Medicine, University of Oslo in Norway from 1992 to 2003. She is professor emerita of nursing at the University of Rhode Island, from which she retired in 2004, and has held the professorship at Buskerud University College in Norway from 2004 to 2008. Currently she is a research project director at Buskerud University College. Dr. Kim had taught at the University of Rhode Island since 1973 and was dean of the College of Nursing there from 1983 to 1988. Her PhD is in sociology from Brown University, and her nursing degrees (BS and MS) are from Indiana University. She has published extensively in the area of nursing epistemology, theory development in nursing, the nature of nursing practice, and collaborative decision-making in nursing practice as well as in various areas of clinical nursing research. She is also the co-editor with Dr. Ingrid Kollak of Germany of the book, Nursing Theories: Conceptual and Philosophical Foundations, of which the first edition was published both in English and German in 1999 and the second edition in 2006.