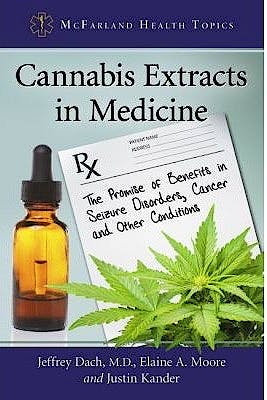 Cannabis Extracts in Medicine. the Promise of Benefits in Seizure Disorders, Cancer and Other Conditions

Legal in 23 states as of June 2014, medicinal Cannabis sativa is widely used, with mainstream news and scientific sources reporting success stories of people suffering from such diverse medical conditions as epilepsy, cancer and chronic pain. In states where it remains illegal, however, providers of medicinal cannabis risk arrest.

While the United States government restricts medicinal cannabis research, advances have been made in Israel, Spain and Italy. One such breakthrough was the discovery of cannabinoids (compounds found in cannabis) that mimic endogenous neurotransmitters in the brain and in the immune system, and are thus likely to be able to directly affect a host of degenerative diseases. Focusing on the biochemical properties, medical benefits and psychological effects of cannabinoids, this book provides an overview of current research and clinical trials, examines the rationales behind cannabis' status as a Schedule I narcotic and discusses the uses of industrial hemp.

Elaine A. Moore has worked in hospital laboratories for more than 30 years, primarily in immunohematology and toxicology. She is a freelance medical writer and laboratory consultant. She lives in Sedalia, Colorado, USA.

Justin Kander is a seasoned activist for cannabis extract medicine. In 2013, he published the most extensive compilation of scientific and anecdotal evidence supporting the medicinal use of cannabis in humans. Since 2009, Kander has also consulted with patients using cannabis extracts for cancer and other diseases. In November 2014, he presented at the Inaugural Australian Medicinal Cannabis Symposium about the anti-cancer effects of cannabinoids in animals and humans. He lives in Baltimore, Maryland, USA.