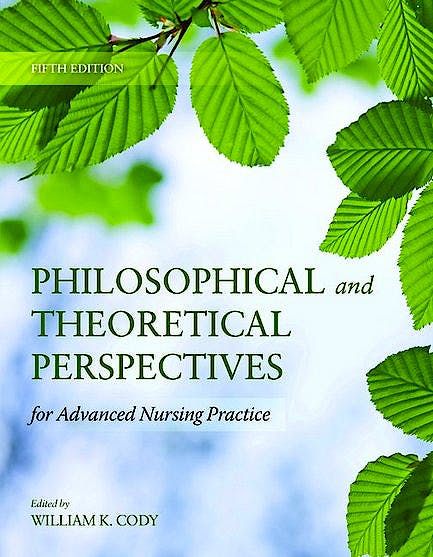 Part 1 The Nursing Discipline and the Development of Nursing Knowledge

Chapter 1 Values-Based Practice and Evidence-Based Care: Pursuing Fundamental Questions in Nursing Philosophy and Theory
Chapter 2 Structuring Nursing Knowledge: A priority for creating nursing’s future
Chapter 3 Fundamental Patterns of Knowing in Nursing
Chapter 4 The State of Nursing Science: Hallmarks of the 20th and 21st Centuries
Chapter 5 What Constitutes Nursing Science
Chapter 6 Nursing Theory-Based Practice: What It Is and What It Is Not
Chapter 7 A Practice Discipline that’s Here and Now

Chapter 28 Theory-Based Advanced Nursing Practice
Chapter 29 What will count as evidence in the year 2050?
Chapter 30 An Ontological View of Advanced Practice Nursing
Chapter 31 The Nurse Scholar of the 21st Century
Chapter 32 Theoretical and Philosophical Horizons for Nursing Practice

William Cody is Dean of the Presbyterian School of Nursing at Queens University of Charlotte. He was Chair of Family and Community Nursing at the University of North Carolina at Charlotte from 1997 to 2005, and has 27 years of experience in nursing. Cody holds a bachelor's degree in nursing from Regents College, Albany, NY, a master's in nursing from Hunter College, and a PhD, in nursing from the University of South Carolina. The author of nearly 100 publications on theory, research, and practice in nursing, Cody is perhaps best known as former Contributing Editor for Theoretical Concerns at Nursing Science Quarterly. Cody is a Fellow in the American Academy of Nursing and a Fellow in the Robert Wood Johnson Executive Nurse Fellows Program, which promotes senior leadership in healthcare. He is active in community health and HIV/AIDS care, and is a national leader in the contemporary nursing center movement.