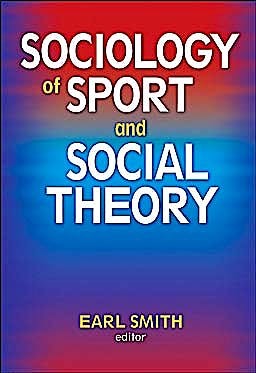 Sociology of Sport and Social Theory

Sociology of Sport and Social Theory presents current research perspectives from major sport scholars and leading sociologists regarding issues germane to the sociology of sport. Each chapter of this resource explains historical and contemporary social theories and applies these theories to current topics in sport, such as performance-enhancing drugs, gender, race and identity issues, and the role of religion in sport.

Sociology of Sport and Social Theory introduces readers to the historical and theoretical underpinnings of social theory, how sport studies have incorporated or diverged from these theories, and how the application of various sociological lenses to sport contexts may converge for future research. Merging the fields of sport studies and sociology, the text provides readers with

Structured in four parts, this text expands discussion beyond theoretical paradigms typically employed by sport sociologists to consider traditional theories (conflict theory and structural functionalism) and contemporary sociological theories (feminist theory, social capital theory, and relational theory) and their application in sport contexts. Each chapter begins with a theory overview and concludes with suggestions for future research and an annotated list of additional resources.

In part I of the text, readers will encounter a Weberian analysis of sport, learn how Mills’ theory of the sociological imagination provides a lens through which an athlete-author can analyze athletic events, and read a discussion of Elias’ figurational theory as applied to issues of hooliganism in soccer. Mid-level sociological theories, which provide a moderate convergence of theory and empirical research, are the focus in part II of the text. Chapters in part III address sport-related issues of gender, race, ethnicity, and social class using the contemporary sociological views of feminist theory, social reproduction theory, hegemonic masculinity theory, and structuration theory. Part IV considers issues of power, personality, citizenship, and dominance in sport.

Sociology of Sport and Social Theory addresses a range of topics at the forefront of both scholarly and public discourse and provides readers the opportunity to consider these issues in light of traditional and contemporary sociological theories. With its broad range of perspectives and analyses, Sociology of Sport and Social Theory illustrates for students, sport scholars, and social scientists how sociological theory can provide a suitable framework for understanding patterns that exist in the world of sport.

A reference for sport sociologists, general sociologists or theorists with an interest in sport, and scholars in sport studies. Also for upper-level undergraduate and graduate students needing a text that relates sport with sociological theory.

Earl Smith, PhD, is director of American ethnic studies and professor of sociology at Wake Forest University in Winston-Salem, North Carolina. He has over 20 years of experience as an instructor and researcher of topics in sociology of sport, and he has gained recognition as a Rubin Distinguished Professor. He focuses on the intersection of sociological, psychological, and economic theories and empirical research in sport.

In 2008, Smith was awarded the North American Society for the Sociology of Sport (NASSS) Book Award. He has also served as president of NASSS. In 2008-2009, the department of anthropology and sociology at Colgate University in Hamilton, New York, presented Smith with the Arnold A. Sio Distinguished Professor of Community and Diversity Award.