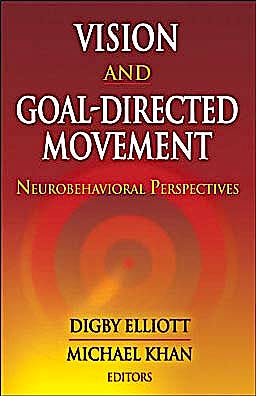 To interact with the environment, an individual must code, store, and translate spatial information into the appropriate motor commands for achieving an outcome. Working from this premise, Vision and Goal-Directed Movement: Neurobehavioral Perspectives discusses how visual perception, attention, and memory are linked to the processes of movement preparation and execution.

• Comprehensive coverage of current behavior-based literature on the visual control of goal-directed movement
• A systematic explication of the sensory and physiological processes and systems responsible for fast, accurate, and efficient performance
• A solid foundation for further study of the sensory and neural systems responsible for precise goal-directed behavior
• A discussion of how current research on vision and goal-directed movement can assist in creating efficient and safe work environments

Using research informed by neural imaging and magnetic brain stimulation, this text provides readers with a better understanding of the neural foundations for goal-directed movement, illustrates the flexibility of the human visuomotor system, and discusses how regulation of movements depends on the learning and developmental history of the performer. It begins by reviewing the works of R.S. Woodworth and the influence of his theories on current research. The majority of the chapters in the first section of the book take a behavioral and process-oriented approach to exploring goal-directed movement. The text then explores the sensory and neural foundations for goal-directed action, including issues related to both pursuit and saccadic eye movements as well as discussion of the specialization of various cortical systems for the regulation of movement. Especially relevant to professionals and scientists concerned with skill instruction and rehabilitation, the final part of the text provides a review of recent research on how and why limb control changes occur with practice and development. In addition, Vision and Goal-Directed Movement considers how the research presented can maximize precision, efficiency, and safety in workspace design.

Vision and Goal-Directed Movement: Neurobehavioral Perspectives adds a unique offering to the literature base for motor behavior, demonstrating how advances in both behavioral and neurophysiological methods can inform theories related to the biological systems contributing to skilled performance.

Part I. A Behavioral Approach to Vision and Goal-Directed Movement

Chapter 5. Memory-Guided Reaching: What the Visuomotor System Knows and How Long It Knows It
Matthew Heath, Kristina A. Neely, Olav Krigolson, and Gordon Binsted
The Temporal Durability of Stored Target Information
Visual Awareness and the Evocation of Visually Guided and Memory-Guided Reaches
Visual Coordinates or a Fully Specified Movement Plan
Memory-Guided Reaches and the Relationship Between End-Point Error and Corticomotor Potentials
Conclusions and Future Directions

Part II. Sensory and Neural Systems for Vision and Action

A reference for researchers in movement science, experimental psychology, and neuroscience. A supplement text for upper-level undergraduate or graduate-level courses covering special topics.

Digby Elliott, PhD, is a professor of motor control and behavioral neuroscience in the School of Sport and Exercise Sciences at Liverpool John Moores University (Liverpool, United Kingdom). Previously, he was the Canada research chair in motor control and special populations at McMaster University (Hamilton, Ontario), where he was also a professor emeritus. He has served aspresident of the Canadian Society for Psychomotor Learning and Sport Psychology (SCAPPS) and as president of the North American Society for the Psychology of Sport and Physical Activity (NASPSPA).

Elliott has over 30 years of research experience in the area of motor control with over 200 peer-reviewed articles in publication. He has held visiting professorships at universities throughout the world, most recently at the University of Otago in New Zealand as a William Evans scholar in 2000 and at Katholieke Universiteit Leuven in Belgium as a senior research fellow in 1999. Elliott was awarded the Wood Award for Research Excellence in 2000 from the Down Syndrome Research Foundation.

Elliott and his wife, Elaine, reside in Bancroft, Ontario. In his free time, he enjoys hiking, snorkeling, and playing with his seven grandchildren.

Michael Khan, PhD, is a professor of motor control and learning and head of the School of Sport, Health, and Exercise Sciences at BangorUniversity in Wales, United Kingdom.

He has more than 15 years of research experience in the area of motor control. Collaborating with researchers in the United Kingdom, Europe, and North America, Khan has focused his research on the investigation of cognitive processes underlying movement control. He has published more than 30 peer-reviewed articles, book chapters, and conference proceedings. Khan has presented his research as an invited lecturer in the United Kingdom, Europe, North America, and the Caribbean.

A sport enthusiast, especially in West Indian cricket, Kahn also enjoys playing and coaching squash. He was a former top national squash player for Trinidad and Tobago and is currently very active as a coach at the junior level. He and his wife, Martha, reside at Tregarth in Gwynedd, Wales.