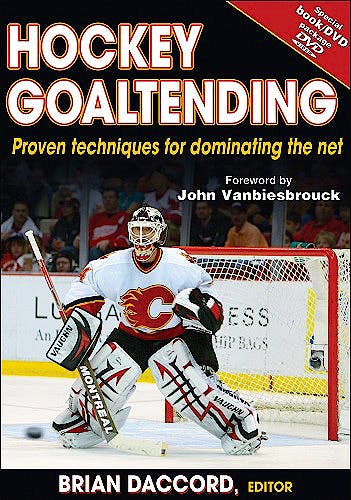 hockey
About the Product

Hockey Goaltending brings together the world’s top goaltending coaches to create the premier resource for goalies and coaches at every level of play. Their expertise and insight provide comprehensive instruction on every facet of this challenging position:

Additionally, this special package includes a DVD of on-ice footage emphasizing key techniques and skills of the position. From vital tactics and strategies to a goalie’s unique equipment needs, Hockey Goaltending is simply the most complete guide available for players who wish to excel at the game’s toughest position.

Brian Daccord is a former goaltending consultant of the Boston Bruins. His "Ask the Coach" column appears in each issue of Goalies’ World magazine, and he can be heard across North America on his weekly radio segment “Between the Pipes With Brian Daccord” on the Fast Hockey Show on XM radio. Coach Daccord was featured in Hockey News as one of the NHL’s top goalie coaches with “crease clout.” He has worked with more than 30 professional goaltenders since 1999, including 2003-04 NHL Rookie of the Year Andrew Raycroft, NHL record holder for consecutive shutout minutes Brian Boucher, and Scott Clemmensen, national champion from Boston College. Daccord has also helped develop 22 NHL draft picks since 2000. His current clients include top NHL, AHL, ECHL, college, and junior goaltenders.

Currently, Daccord trains many of the top goaltenders in the country at Stop It Goaltending. He is also the director of the Goaltending Consultant Group, which features many of the top goalie coaches in North America. He is a former coach and player at Merrimack College (NCAA Division I) and played seven seasons of professional hockey in Switzerland. He has coached at every level of youth hockey as well as the U.S. prep school, junior, college, and professional levels. Daccord holds a master-level coaching certification with USA Hockey and also has earned a master’s degree in sport science. He lives in North Andover, Massachusetts, with his wife, Daniela, and two sons, Joey and Alex.

"Hockey Goaltending defines the art of goaltending while maintaining a clear approach. The authors break down the fundamentals you need in order to understand and achieve your goals and saves."

"This is a soup-to-nuts book that will benefit goalies at all levels. It makes the complicated seem simple, and it explains what a goalie should be thinking and doing in every imaginable confrontation with a shooter."

"In this book, Brian Daccord has assembled a comprehensive approach to training goalies in the modern game."