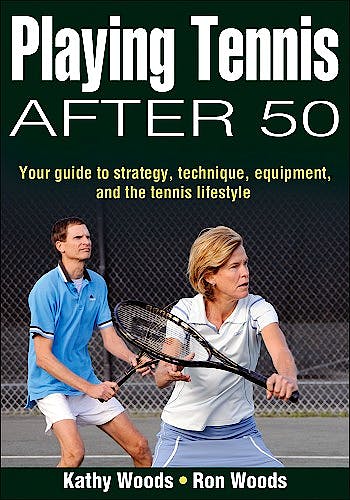 Whether you are just starting out, have been competing for decades, or are returning to the game after an extended break, Playing Tennis After 50 will improve your play and enhance your experience on and off the court.

With tactics and techniques ranging from basic to advanced, you’ll learn to adapt court positioning and tweak shot selection for stellar singles, doubles, and mixed doubles play. Special features such as how-to-practice games and Stroke Doctor tips will correct common errors and improve skills while you play the game.

Off the court, Playing Tennis After 50 will help you avoid aches and injury with stretching and strengthening exercises. Then double your pleasure with expert information on the latest equipment, tips on finding the right club and playing partner, and ways to make tennis a lifelong activity!

Kathy Woods served as president of the United States Professional Tennis Association (USPTA) from 1994 to 1996, the first and only female to serve the association in that capacity. Founded in 1927, the USPTA is the world’s oldest and largest nonprofit trade and certifying association for tennis teaching professionals. Currently, she is the director of tennis at the highly regarded Racquet Club of St. Petersburg. A certified teaching professional for almost 30 years, Woods has directed tennis programs in Princeton, New Jersey; Key Biscayne, Florida; and Westport, Connecticut. She has been a featured speaker for the International Tennis Federation at the Worldwide Coaches Workshop, the Japanese Professional Tennis Association, the USTA National Tennis Teachers Conference, and many regional workshops and conferences. In 1996, she was honored with the prestigious Educational Merit Award by the International Tennis Hall of Fame for outstanding service in tennis at the national level. As a competitive player, she earned a coveted Gold Ball by winning the USTA National 30s Doubles championships and has been ranked first in the nation by the USPTA in both singles and doubles. Woods played varsity tennis and graduated summa cum laude from the University of Pennsylvania.

Ron Woods, PhD is a performance coach for the Human Performance Institute in Orlando, Florida, and an adjunct professor of sport science at the University of South Florida and the University of Tampa. He spent 20 years with the United States Tennis Association, serving as director of the community tennis programs with a major focus on the USA Tennis Plan for Growth, a massive project to increase tennis participation in the United States. He also initiated the USTA Welcome Back to Tennis campaign for players over age 50. For the 10 years prior to that, Ron was the USTA’s director of player development, a program that develops top junior players into touring professional players. Earlier in his career, Woods was professor of physical education and men’s tennis coach at West Chester University for 17 years. During his time at West Chester, he also served as dean of the School of Health, Physical Education, Recreation, and Athletics. He has been inducted into West Chester University’s Athletic Hall of Fame. A graduate of East Stroudsburg University and an inductee into their Athletic Hall of Fame, Woods received his PhD from Temple University with an emphasis in sport psychology and motor learning. The International Tennis Hall of Fame awarded Ron the Educational Merit Award in 1997. He was also honored by the USPTA as National Coach of the Year in 1982 and named a master professional in 1984. His accomplishments include eight years on the coaching committee of the United States Olympic Committee and the Coaches’ Commission of the International Tennis Association. Woods authored Social Issues in Sport and has written and edited numerous USTA publications, including Coaching Youth Tennis, Tennis Tactics, and Coaching Tennis Successfully, all published by Human Kinetics.

Part I Take It to the Court
Chapter 1. The Game Past 50
Chapter 2. Tennis Is a Physical Game
Chapter 3. Learning to Love Competition

"This book is a must-read for those 50 and over! The same instruction that helped us win Grand Slams, reach and maintain worldwide No. 1 rankings, and win the Davis Cup championship is yours in Playing Tennis After 50. For those players who come together for camaraderie or competitiveness, this is sure to be a smash hit."

"Ron and Kathy Woods have created a helpful resource for new, returning, and continuing tennis players alike. With coverage of skills, technique, and social and mental aspects of play, Playing Tennis After 50 is a practical guide to aging actively."

"Playing Tennis After 50 shows not only why someone over 50 should play the game but also how to play and enjoy it with a different set of skills and awareness of weaknesses."

Stan Smith
1972 World No. 1 Player of the Year
Rated by Tennis magazine as one of the 40 greatest players
One of the best doubles players of all time

"Tennis is the perfect sport to help keep you young and fit after 50. In Playing Tennis After 50, Kathy and Ron share their experiences and knowledge to make tennis a rewarding and healthy activity."