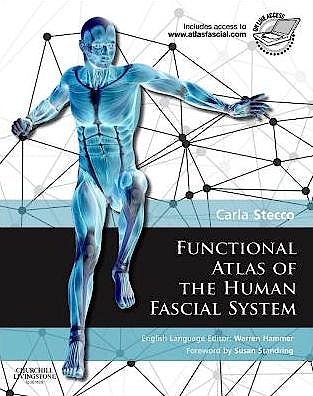 Principally based on dissections of hundreds of un-embalmed human cadavers over the past decade, Functional Atlas of the Human Fascial System presents a new vision of the human fascial system using anatomical and histological photographs along with histological analysis and biomechanical evaluation.

Dr Carla Stecco brings together the research of a multi-specialist team of researchers and clinicians consisting of anatomists, biomechanical engineers, physiotherapists, osteopaths and plastic surgeons. Together with this anatomical research and the biomechanical model used, the Atlas helps to explain how fascia plays a part in myofascial dysfunction and disease as well as how it may alter muscle function and disturb proprioceptive input. Dr Stecco also highlights the continuity of the fascial planes, explaining the function of the fasciae and their connection between muscles, nerves and blood vessels. This understanding will help guide the practitioner in selecting the proper technique for a specific fascial problem with a view to enhancing manual therapy methods.

Functional Atlas of the Human Fascial System opens with the first chapter classifying connective tissue and explaining its composition in terms of percentages of fibres, cells and extracellular matrix. The second chapter goes on to describe the general characteristics of the superficial fascia from a macroscopic and microscopic point of view; while the third analyzes the deep fascia in the same manner. The subsequent five chapters describe the fasciae from a topographical perspective. In this part of the Atlas, common anatomical terminology is used throughout to refer to the various fascia and it also stresses the continuity of fascia between the different bodily regions.

Warren Hammer DC, MS, DABCO has been in practice in Norwalk, Connecticut, USA for the past 50 years. He has studied numerous soft-tissue methods and applies them to the practice of chiropractic. He has lectured nationally and internationally and recently completed his third edition of Functional Soft-Tissue Examination and Treatment by Manual Methods available from Jones & Bartlett publishers. He writes a regular column for Dynamic Chiropractic since 1985 (over 300 articles) and has written articles for prominent journals such as Chiropractic Sports Medicine, the Journal of Manipulative and Physiological Therapeutics, Chiropractic Technique and the Journal of Bodywork and Movement Therapies. Dr. Hammer has been a consultant and instructor for Graston Technique since 2001. He has spent time in Italy learning FM and has observed Luigi Stecco, PT in his clinic. During the past year he has assisted Antonio Stecco MD in presenting FM in the US and plans to teach it with Dr. Stecco during 2012. Warren will be qualified to be an instructor in Facial Manipulation some time in 2012.