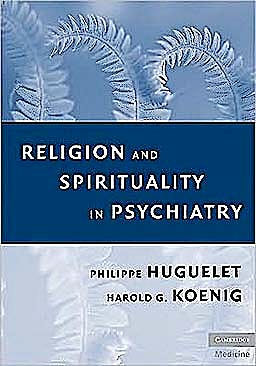 Religion and Spirituality in Psychiatry

Although medicine is practised in a secular setting, religious and spiritual issues have an impact on patient perspectives regarding their health and the management of any disorders that may afflict them. This is especially true in psychiatry, as feelings of spirituality and religiousness are very prevalent among the mentally ill. Clinicians are rarely aware of the importance of religion and understand little of its value as a mediating force for coping with mental illness. This book addresses various issues concerning mental illness in psychiatry: the relation of religious issues to mental health; the tension between a theoretical approach to problems and psychiatric approaches; the importance of addressing these varying approaches in patient care and how to do so; and differing ways to approach Christian, Muslim, and Buddhist patients. This is the first book to specifically cover the impact of religion and spirituality on mental illness.

• Aims at helping clinicians address religious issues in psychiatry, in a clear, concise manner • Gives information on a wide array of psychiatric disorders • Involves multicultural perspective and multiple points of view, relevant for clinicians around the world