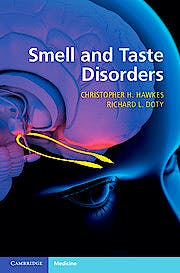 Loss of the sense of smell or taste is often a sign of neurological disease. Evaluating chemosensation (the senses of smell and taste) during neurological examination can help early detection of neurodegenerative conditions such as Parkinson's and Alzheimer's disease. The importance of such testing is now receiving increasingly high profile in the medical curriculum. In this book, olfactory conditions are completely updated and the sense of taste is now included in similar detail. It is written by experts in the field, covering anatomy and physiology of human olfaction and taste, how they can be measured and their relevance to a wide range of major disorders such as diabetes, kidney disease, Alzheimer's and Parkinson's disease. The 'Olfactory Vector Hypothesis' that suggests a neuropathogen may enter the nose en route to the brain is evaluated in detail. This introduction to smell and taste disorders is an essential guide for neurologists, neurosurgeons, otolaryngologists, medical trainees, and chemosensory scientists.