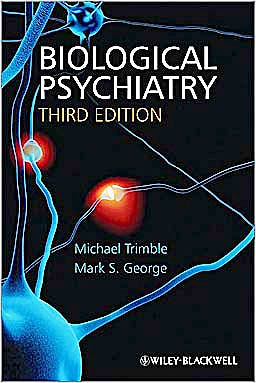 Biological psychiatry has dominated psychiatric thinking for the past 40 years, but the knowledge base of the discipline has increased substantially more recently, particularly with advances in genetics and neuroimaging. The third edition of Biological Psychiatry has been thoroughly updated taking into account these developments. As in the earlier editions of the book, there are comprehensive reviews and explanations of the latest advances in neurochemistry, neuroanatomy, genetics and brain imaging— descriptions not only of methodologies but also of the application of these in clinical settings. It is within this context that there is a considerable emphasis in the book on brain–behaviour relationships both within and without the clinical setting.
This edition has been enhanced by the inclusion of new chapters, one on anxiety and another on motivation and the addictions. The chapter that relates to treatments has been extended to include the latest information on brain stimulation techniques. The overall book is well illustrated in order to help with an understanding of the text.

For the third edition, Professor Michael Trimble has been joined by Professor Mark George as co-author. These are two of the world's leading biological psychiatrists who both have considerable clinical as well as research experience which they have brought to the book. Unlike multiauthored texts, it has a continuity running through it which aids understanding and prevents repetition.

This book is strongly recommended for all practising psychiatrists and trainees wishing for an up-to-date, authoritative, easy to digest and acessible review of the latest advances and conceptualizations in the field. It will also appeal to neurologists interested in neuropsychiatry and biological psychiatry or the psychiatric aspects of neurological disorders, as well as other practising clinicians (psychologists, social workers, nurses) in the mental health field.

1 Principles of Brain Function and Structure: 1 Genetics, Physiology and Chemistry.

9 The Addictions and Disorders of Motivation.

Professor Trimble was for many years Professor of Behavioural Neurology and Consultant Physician to the Department of Psychological Medicine at the National Hospital Queen Square, London. He now holds emeritus status at the above institutions. He studied general medicine, obtaining membership of the Royal College of Physicians before going to the National Hospital Queen Square and then the Maudsley Hospital to advance his training in neurology and psychiatry. Following an internship in psychiatry at the Johns Hopkins Hospital, Baltimore, he returned to the National Hospital to pursue a career in neuropsychiatry. He set up a research group with main interests in the interface disorders between neurology and psychiatry, reflected in the developing recognition of neuropsychiatry and behavioural neurology as independent disciplines. The research group (Raymond-Way Unit) explored the behavioural consequences of neurological disorders and their treatment, with a major interest in epilepsy and movement disorders. His current writing and academic interests involve teaching and lecturing on neuroanatomical concepts relevant to understanding behaviour and its variations, in particular with an interest in neuroaesthetics and neurotheology, namely the cerebral basis of artistic and religious experiences.

Dr. George received his medical degree from the Medical University of South Carolina in Charleston in 1985, where he continued with dual residencies in neurology and psychiatry. He is board certified in both areas. He worked for one year (1990-91) as a Visiting Research Fellow in the Raymond Way Neuropsychiatry Research Group at the Institute of Neurology, London. He and Professor Trimble used pharmacology and imaging to study the overlaps between Obsessive-Compulsive Disorder and Gilles de la Tourette Syndrome. During this year he also worked on new functional imaging techniques (SPECT and PET) at the Institute of Nuclear Medicine, University College of London and Middlesex School of Medicine, London. He wrote one of the first textbooks in the new area of brain activation and imaging. Dr George then moved to Washington, DC, working with Dr. Robert Post in the Biological Psychiatry Branch of the Intramural National Institute of Mental Health. He was one of the first to use functional imaging (particularly oxygen PET) to assess brain changes associated with normal emotions, as well as using imaging to understand brain changes which occur in depression and mania. This imaging work directly led to his pioneering use of transcranial magnetic stimulation (TMS) as a probe of neuronal circuits regulating mood, and to clinical trials using TMS as an antidepressant. In 2008 prefrontal TMS was FDA approved as an antidepressant treatment. In 1995 he moved back to Charleston and built the functional neuroimaging division and brain stimulation laboratories. This imaging group has grown into the MUSC Center for Advanced Imaging Research, which is now part of the SC Brain Imaging Center of Excellence. He continues to use imaging and non-invasive stimulation, either separately or more recently in combination, to understand the brain regions involved in emotion regulation in health and disease. In 1998, he pioneered another new treatment for resistant depression, vagus nerve stimulation, that was recently FDA approved. He and his group have used MRI imaging to understand brain stimulation brain effects. He is on several editorial review boards, and has published over 200 scientific articles, and has written or edited 5 books. He is the editor-in-chief of a new journal, Brain Stimulation.
He has received several international awards, including the World Federation of Societies of Biological Psychiatry Lifetime Achievement Award (2007), the NARSAD Falcone Award (2008) and he was honored as one of 14 'Pioneers of Medical Progress' saluted in the August 2009 edition of US News & World Report.