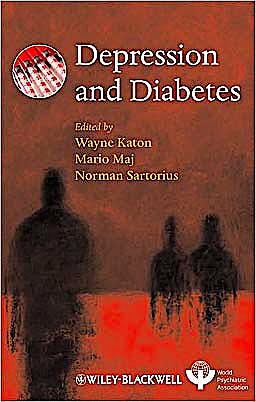 In recent years, there has been a growing awareness of the multiple interrelationships between depression and various physical diseases. The WPA is providing an update of currently available evidence on these interrelationships by the publication of three books, dealing with the comorbidity of depression with diabetes, heart disease and cancer.
Depression is a frequent and serious comorbid condition in diabetes, which adversely affects quality of life and the long-term prognosis. Co-occurrent depression presents peculiar clinical challenges, making both conditions harder to manage.

Depression and Diabetes is the first book devoted to the interaction between these common disorders. World leaders in diabetes, depression and public health synthesize current evidence, including some previously unpublished data, in a concise, easy-to-read format. They provide an overview of the epidemiology, pathogenesis, medical costs, management, and public health and cultural implications of the comorbidity between depression and diabetes. The book describes how the negative consequences of depression in diabetes could be avoided, given that effective depression treatments for diabetic patients are available.

Its practical approach makes the book ideal for all those involved in the management of these patients: psychiatrists, psychologists, diabetologists, general practitioners, diabetes specialist nurses and mental health nurses.

CHAPTER 2. Unravelling the pathogenesis of the depression-diabetes link
Khalid Ismail

Wayne Katon, MD, is Professor of Psychiatry, Director of the Division of Health Services and Epidemiology, and Vice Chair of the Department of Psychiatry and Behavioral Sciences at the University of Washington Medical School. He is Director of a NIMH-funded National Research Service Award Primary Care-Psychiatry Fellowship that has successfully trained psychiatrists and primary care physicians for academic leadership positions. Dr. Katon is internationally renowned for his research on the prevalence of anxiety and depressive disorders in primary care, the relationship of psychiatric disorders to medically unexplained symptoms such as headache and fatigue, and the impact of depression and anxiety on patients with chronic medical illness. In recent years, his research has focused on developing innovative models of integrating mental health professionals and other allied health personnel into primary care to improve the care of patients with major depression and panic disorder.
Dr. Katon has been awarded the American for Excellence in Teaching in Primary Care numerous times. He also has been awarded the Academy of Psychosomatic Medicine Research Award (1993) and the American Psychiatric Association Senior Scholar Health Services Research Award (1999) and the Depression and Bipolar Support Alliance Gerald L. Klerman Senior Investigator Award (2003). He is Editor-in-Chief of General Hospital Psychiatry and is honored by being one of the Web of Science Highly Cited Authors.

Dr. Katon has written over 400 peer-reviewed journal articles and chapters, as well as Panic Disorder in the Medical Setting, a book for primary care physicians. In addition, Dr. Katon and his research team have written a self-help book for depressed patients titled Depression: Self-Care Companion for Better Living.

Norman Sartorius served as Director of the Division of Mental Health of the World Health Organization (WHO) and was the principal investigator of several major international studies on schizophrenia, on depression and on health service delivery. He has published more than 330 articles in scientific journals, authored or co-authored several books and edited a number of others.

Professor Sartorius is a corresponding member of the Croatian Academy of Arts and Sciences and of the Spanish Royal Academy of Medicine, member of the Medical Academies of Croatia, Peru and Mexico. He has honorary doctorates from the Universities of Umea, Prague and Bath and is an Honorary Fellow or honorary member of numerous psychiatric associations. He is also the editor of three journals and a member of the editorial board of many more.