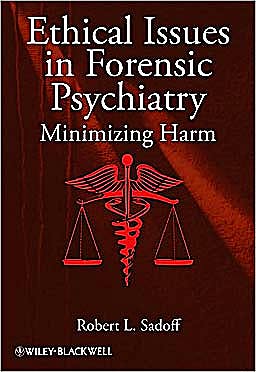 Ethical medical practice and treatment in psychiatry are based on the concept of first do no harm. However, this cannot, and does not, apply to forensic cases where there is no doctor–patient relationship and the forensic psychiatrist may indeed cause harm to the examinee. In this book, Robert Sadoff analyzes the ethical issues affecting forensic psychiatric practice, especially those promulgated by the American Academy of Psychiatry and the Law. Within those guidelines, he looks at individual bias, vulnerability of the examinee, and potential harm to the mental health professional. The book discusses each of the procedures of the forensic expert separately with respect to minimizing harm. It has been written with an international audience in mind and features chapters reviewing the European and UK perspectives, by Emanuele Valenti and John Baird, respectively.
Robert Sadoff addresses the long-term harm that can be either avoided or minimized through careful planning and application of ethical principles. He is not advocating that the harm can be totally eliminated, because that is impossible in the adversarial system in which forensic psychiatrists work. However, there are means by which harm may be minimized if care is taken during the assessment, the report writing, and the testimony phase of the proceedings. The book develops the scope of forensic psychiatry from the standpoint of administrative, civil and criminal cases. It presents the practical issues involved in conducting forensic psychiatric assessments under various conditions plus special considerations, such as bias, minimizing harm, developing a therapeutic approach, and elaborating on various vulnerable individuals who are frequently examined in forensic cases. These include juveniles, mentally retarded, autistic, sexual assault victims, the elderly, the organically damaged, the psychotic, and mentally disabled prisoners. Immigrants are covered in a chapter by Solange Margery Bertoglia. The ethical issues in conducting forensic psychiatric examinations and presenting psychiatric testimony in court are examined and discussed. Cases illustrating the difficulties involved punctuate the presentation. The book closes with a fascinating account of the legal perspective by Donna Vanderpool.

In summary, this book illustrates the ethical and practical issues that affect forensic psychiatric practice. The question is not what we do, but how we do it, and which standards, ethical guidelines and personal values contribute to the total picture. Despite the fact that we cannot always adhere to the doctrine of “primum non nocere,” we can minimize the harm caused inherently by the adversarial system in which we participate.

"One of the founding giants of the forensic psychiatric field has written here far more than a “mere” ethics textbook. Instead, this compendium serves multiple purposes: it is a valuable primer on forensic techniques of examination and testimony, a model of best forensic practices, and an instruction on the most appropriately civilized way in which to conduct oneself as a forensic psychiatrist.

The success of these multiple accomplishments clearly derives from characteristics of the author. In both sage advice to practitioners and in many revealing case examples, Dr. Sadoff displays the tact, good manners and sensitivity of a consummate gentleman – a term not always associated with the hurly-burly of courtroom work. The book’s primary focus on avoiding harm to all the parties involved in the work places it on the moral high ground of the legal system in which participating clinicians must find a place."

Dr. Sadoff is the author of over 100 articles in medical and legal journals, more than 30 chapters in other books, and has authored, edited, or coauthored 8 books, including Forensic Psychiatry: A Practical Guide for Lawyers and Psychiatrists, Psychiatry Malpractice: Cases and Comments for Clinicians and Mental Health Experts: Roles and Qualifications for Court. Dr. Sadoff has examined over 10,000 individuals charged with crimes during the past 40 years, and has testified for both the prosecution and defense in criminal cases and for the plaintiff and defense in civil cases in approximately 20 states and several federal jurisdictions.

Dr. Sadoff is the recipient of numerous awards, including Best Doctors in America, Who’s Who in the World, The Lifetime Achievement Award of the Philadelphia Psychiatric Society, the Nathaniel Winkelman Award, the Manfred Guttmacher Award from the American Psychiatric Association, the Philippe Pinel Award from the International Academy of Law and Mental Health, and the prestigious Isaac Ray Award from the American Psychiatric Association. He has also received the Earl Bond Award from the University of Pennsylvania as the Outstanding Teacher in Psychiatry for 1979, and the Dean’s Award for Outstanding Contributions to Medicine at the University of Pennsylvania Medical School for 2008.