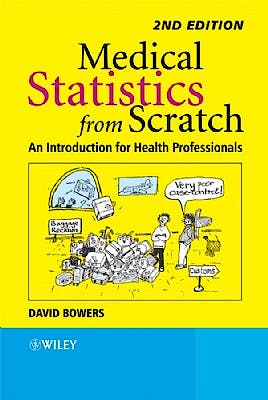 Medical Statistics from Scratch: An Introduction for Health Professionals

This long awaited second edition of this bestseller continues to provide a comprehensive, user friendly, down-to-earth guide to elementary statistics. The book presents a detailed account of the most important procedures for the analysis of data, from the calculation of simple proportions, to a variety of statistical tests, and the use of regression models for modeling of clinical outcomes.

The level of mathematics is kept to a minimum to make the material easily accessible to the novice, and a multitude of illustrative cases are included in every chapter, drawn from the current research literature. The new edition has been completely revised and updated and includes new chapters on basic quantitative methods, measuring survival, measurement scales, diagnostic testing, bayesian methods, meta-analysis and systematic reviews.

"... After years of trying and failing, this is the only book on statistics that i have managed to read and understand" - Naveed Kirmani, Surgical Registrar, South London Healthcare HHS Trust, UK

I Some fundamental stuff.

III Getting the data.

7 From samples to populations – making inferences.

9 Estimating the value of a single population parameter - the idea of confidence intervals.

VI Putting it to the test.

12 Testing hypotheses about the difference between two population parameters.

13 Testing hypotheses about the ratio of two population parameters.

14 Testing hypotheses about the equality of two or more proportions.

VII Getting up close.

15 Measuring the association between two variables.

16 Measuring the agreement between two variables.

VIII Getting into a relationship.

Students of medical statistics will find the book a trusty companion. (Journal of Tropical Pediatrics, November 2008)