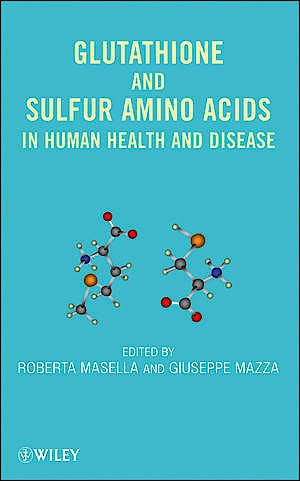 Glutathione and Sulfur Amino Acids in Human Health and Disease

Glutathione (Á-L-glutamyl-L-cysteinylglycine, GSH) is a major antioxidant acting as a free radical scavenger that protects the cell from reactive oxygen species (ROS). Sulfur amino acids (SAAs), such as methionine and cysteine, play a critical role in the maintenance of health. GSH depletion as well as alterations of SAA metabolism are linked to a host of disease states including liver cirrhosis, various pulmonary diseases, myocardial ischemia and reperfusion injury, aging, Parkinson's disease, Alzheimer's disease, sepsis, and others. This book provides researchers with a comprehensive review of the biochemistry, absorption, metabolism, biological activities, disease prevention, and health promotion of glutathione and sulfur amino acids.

The twenty-two chapters explore such topics as:

Special attention is paid to the molecular mechanisms for the modulation of transcription factors and enzyme activities, as well as the nutritional and therapeutic significance of dietary sulfur amino acids as shown in human and animal models.

CHEMISTRY AND METABOLISM OF GSH AND SULFUR AMINO ACIDS.

BIOACTIVITY OF GSH AND SULFUR AMINO ACIDS AS REGULATORS OF CELLULAR PROCESSES.

1. Introduction.
2. Carcinogenesis, tumor growth, and cell death.
3. Intercellular and interorgan transport of GSH in tumor-bearing mammals.
4. GSH and the interaction of metastatic cells with the vascular endothelium.
5. Adaptive response in invasive cells.
6. GSH depletion and the sensitization of cancer cells to therapy.
7. References.

GSH AND SULFUR AMINO ACIDS AS DRUGS AND NUTRACEUTICALS.

Roberta Masella works as Head of the Human Nutrition Unit, Department of Veterinary Public Health and Food Safety, at Istituto Superiore di Sanità (ISS). She was previously head of the Gastroenterology Unit in the Laboratory of Metabolism and Pathological Biochemistry at ISS. She is the author of nearly 100 peer-reviewed publications, as well as seventy presentations at international congresses.

Giuseppe (Joe) Mazza is the Principal Food and Bioscience Research Scientist at Agriculture and Agri-Food Canada, Summerland, British Columbia, and an adjunct professor in food science and nutrition at the Universities of Manitoba and British Columbia. A prolific author and editor of over 200 journal articles and twelve books, he is on the editorial boards of World of Food Science, Plant Foods for Human Nutrition, Italian Journal of Food Science, and Journal of Functional Foods.