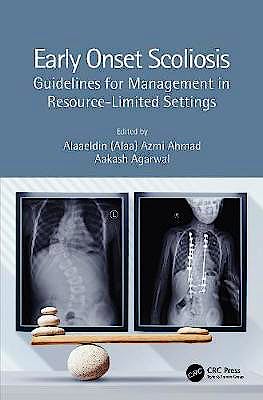 This book follows a context-based approach to management of early-onset scoliosis (EOS) in countries with limited resources in education, finance, and research. Due to the great variety in etiology, onset age, progression rate, and severity associated with EOS, it calls for a unique treatment plan. This book enumerates the optimal provision of surgical and non-surgical services, from education/training of local surgeons, to effective teamwork, to implementing an effective data collection system; helping the surgeon to gain a hands-on experience. It also illustrates the successful execution of deformity correction using real life experiences from countries in Asia, Africa, and Latin America.

A Pediatric Orthopedic Surgeon by training, Dr. Ahmad entered the field of pediatric orthopedic surgery eighteen years ago following a one-year fellowship at Shriner’s Hospital in Los Angeles. Since then, he has initiated pediatric spine surgery and education services in Palestine as well as other countries with limited resources. In his role as a surgeon as well as professor, he holds the position of Professor in Annajah Medical School, Head Of The Pediatric Orthopedic And Spine Unit in Annajah University Hospital, Consultant Pediatric Orthopedic Surgeon in Saint Joseph Hospital – Palestine, and Visiting Consultant Pediatric Spinal Surgeon in Abdali hospital -Jordan. He also holds an adjunct faculty appointment at the orthopedic department in University of South Carolina in Charleston and in the biomedical engineering department at the University of Toledo in Ohio-USA.

As a Pediatric Orthopedic Surgeon, Dr. Ahmad possesses extensive experience in the management of children with spine deformity, with a special interest in early onset scoliosis cases. He invented a new surgical technique that is more affordable than prevailing techniques, and that avoids current surgeries for the growing spine through posterior tethering called Active Apex Correction (APC). Dr Ahmad has presented this technique in numerous international congresses and has published papers in peer reviewed journals discussing its efficiency in the surgical management for children with Early Onset Scoliosis. Currently, this technique is being used in Palestine, Jordan, India, and Mozambique with positive results. Overall, Dr. Ahmad has over than 35 publications in international journals and books, most of them related to early onset scoliosis management. He shares editorial responsibilities as editorial board member in JPO B and as reviewer board member in GSJ, SICOT J, Journal of clinical orthopedic and trauma

Dr. Ahmad has been active in spinal orthopedic education initiatives, both locally and globally. In Palestine he has trained residents in the orthopedic residency program beside being a member of the orthopedic committee of the Palestinian Board for 9 years. He also became head of the orthopedic program at the Palestine International Cooperation Agency (PICA), in charge of developing a Pediatric Spine Surgery Program in Mozambique and Nicaragua as well as pediatric spine missions in Pakistan and Rwanda. Globally, he is a member in the growing spine committee- (SRS), International Outreach Work Group- (NASS), education strategy task force- (AO Spine), spine committee chair and secretary general of World Orthopedic Concern (WOC)- (SICOT), COSECSA international fellow. In addition, he is involved in Weil Cornell Spine education program in Tanzania. He possesses a global vision and the ability and drive to collaborate with colleagues toward the development of education and training programs that can improve spine surgery services in countries with limited resources.

Aakash Agarwal, PhD, is the Director of Research at Spinal Balance Inc. (Toledo, USA) and an Adjunct Professor of Bioengineering at University of Toledo (Toledo, USA). Dr. Agarwal is a prolific researcher in the field of preventive and predictive science of spinal pathology and postoperative complications, such as spinal deformity, surgical site infection, hardware failure, and spino-pelvic imbalance. Dr. Agarwal’s primary expertise lies in new preventative measures to combat spinal surgery complications, including surgical site infection, and implant failures associated with early onset scoliosis. His major interests include translational research with immediate bench-to-bedside applicability. He has been a major contributor to several important projects that have been recognized as majorly significant. He uses combinatory knowledge of biomedical engineering, clinical medicine, mechanical engineering, and biomechanics to study surgical failures and new treatments to mitigate the risk of complications and infections. He is the inventor of a "two-step asepsis" process involving providing spinal implants in an individual-sterile tube, and a preloaded intraoperative sheath allowing implants to be handled hygienically, aimed at reducing surgical site infection and biofilm formation. Dr. Agarwal also have extensively explored the mechanism behind scoliosis spinal implants failure in children. Through human trial studies and biomechanical simulations, he identified the high failure rate of certain distraction-based rods and growth-guided systems and also provided guidelines on how to reduce such failure modes. Dr. Agarwal holds several national and international patents. He is an Editorial Board member for the journals Clinical Spine Surgery and Spine by Lippincott Williams & Wilkins. Dr. Agarwal also is an Advisory Board member for Center for the Disruptive Musculoskeletal Innovation (CDMI) under the aegis of the National Science Foundation (NSF).