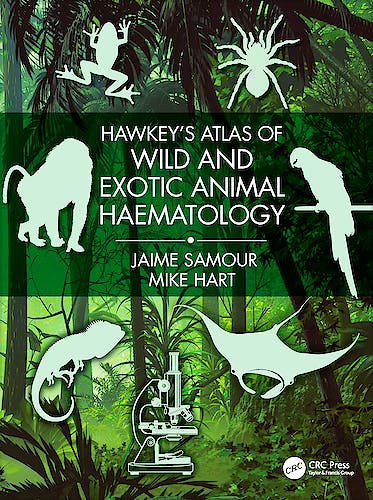 5. Normal and Abnormal Platelets and Thrombocytes

Section B: Atlas of Wild and Exotic Animal Haematology

This revised, updated and expanded edition of Christine Hawkey’s A Colour Atlas of Comparative Veterinary Haematology is bursting with high-quality images to aid identification of blood cells and haemoparasites in the different species commonly seen in private practice and zoological collections. It will assist veterinarians in the identification of normal and abnormal blood cells and in understanding the structural differences of blood cells between the various taxa within the Animal Kingdom. With the help of this guide, readers will be able to understand haemoresponses in the presence of specific and non-specific disease processes and identify haemoparasites commonly seen in blood films from wild and exotic animals.

This impressively illustrated comparative haematology atlas is unrivalled in its scope, quality and accuracy. It is a must-have for veterinary students, veterinary surgeons working in general and referral veterinary clinical practices, clinicians working in zoological collections and specialists in exotic animal medicine.

Jaime Samour is a veterinary surgeon that has devoted the best part of his professional life to falcon medicine. He graduated with honours at the Faculty of Veterinary Medicine in Veracruz, Mexico in 1978. After a short period of time in his native El Salvador working in private practice, he returned to Veracruz and became an Associate Professor at the Faculty of Veterinary Medicine. In 1981, Jaime travelled to London to study and to carry out research projects in reptilian and avian medicine at the Institute of Zoology, Zoological Society of London. He learned and practiced haematology under the supervision of Dr Christine Hawkey and Mike Hart. He was awarded a PhD degree on reproductive biology in birds by the Royal Veterinary College, University of London in 1987. Jaime was recipient of the British Veterinary Zoological Society/Parke-Davies/Upjohn Award in 1998 and the Ted Lafeber Avian Practitioner of the Year Award in 2006. Jaime was awarded Diplomate status of the European College of Zoological Medicine in the Avian Specialty in 2004 and became Professor of Raptor Medicine at the Veterinary College, University of Parma, Italy in 2018.

Mike worked at the Haematology Unit of the Animal Hospital, Institute of Zoology, Zoological Society of London, headed by Dr. Christine Hawkey, from 1969 to 1991. After retiring from ZSL, he worked from 1991 to 2013 at various commercial veterinary diagnostic laboratories specializing in wild and exotic animal haematology in the UK. Mike is a founder member and former committee member of Association of Comparative Haematology, former member of the editorial board of Comparative Haematology International, former member of the editorial board of the Association of Reptilian and Amphibian Veterinarians, former reviewer of exotic animal haematology for the Veterinary Record. He is an Honorary Member of the British Veterinary Zoological Society.