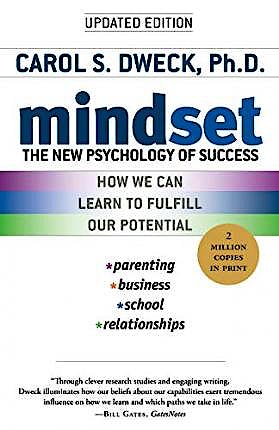 Mindset. The New Psychology of Success

"Through clever research studies and engaging writing, Dweck illuminates how our beliefs about our capabilities exert tremendous influence on how we learn and which paths we take in life."--Bill Gates, GatesNotes

After decades of research, world-renowned Stanford University psychologist Carol S. Dweck, Ph.D., discovered a simple but groundbreaking idea: the power of mindset. In this brilliant book, she shows how success in school, work, sports, the arts, and almost every area of human endeavor can be dramatically influenced by how we think about our talents and abilities. People with a fixed mindset--those who believe that abilities are fixed--are less likely to flourish than those with a growth mindset--those who believe that abilities can be developed. Mindset reveals how great parents, teachers, managers, and athletes can put this idea to use to foster outstanding accomplishment.

In this edition, Dweck offers new insights into her now famous and broadly embraced concept. She introduces a phenomenon she calls false growth mindset and guides people toward adopting a deeper, truer growth mindset. She also expands the mindset concept beyond the individual, applying it to the cultures of groups and organizations. With the right mindset, you can motivate those you lead, teach, and love--to transform their lives and your own.

About Carol S. Dweck
Carol S. Dweck, Ph.D., is widely regarded as one of the world's leading researchers in the fields of personality, social psychology, and developmental psychology. She is the Lewis and Virginia Eaton Professor of Psychology at Stanford University, has been elected to the American Academy of Arts and Sciences and the National Academy of Sciences, and has won nine lifetime achievement awards for her research. She addressed the United Nations on the eve of their new global development plan and has advised governments on educational and economic policies. Her work has been featured in almost every major national publication, and she has appeared on Today, Good Morning America, and 20/20. She lives with her husband in Palo Alto, California.