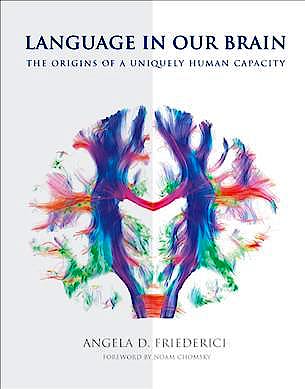 Language in Our Brain: The Origins of a Uniquely Human Capacity

A comprehensive account of the neurobiological basis of language, arguing that species-specific brain differences may be at the root of the human capacity for language.

Language makes us human. It is an intrinsic part of us, although we seldom think about it. Language is also an extremely complex entity with subcomponents responsible for its phonological, syntactic, and semantic aspects. In this landmark work, Angela Friederici offers a comprehensive account of these subcomponents and how they are integrated. Tracing the neurobiological basis of language across brain regions in humans and other primate species, she argues that species-specific brain differences may be at the root of the human capacity for language.

Friederici shows which brain regions support the different language processes and, more important, how these brain regions are connected structurally and functionally to make language processes that take place in milliseconds possible. She finds that one particular brain structure (a white matter dorsal tract), connecting syntax-relevant brain regions, is present only in the mature human brain and only weakly present in other primate brains. Is this the "missing link" that explains humans' capacity for language?

Friederici describes the basic language functions and their brain basis; the language networks connecting different language-related brain regions; the brain basis of language acquisition during early childhood and when learning a second language, proposing a neurocognitive model of the ontogeny of language; and the evolution of language and underlying neural constraints. She finds that it is the information exchange between the relevant brain regions, supported by the white matter tract, that is the crucial factor in both language development and evolution.

Angela D. Friederici is Vice President of the Max Planck Society and Director of the Max Planck Institute for Human Cognitive and Brain Sciences, Leipzig. Noam Chomsky is Institute Professor and Professor of Linguistics (Emeritus) at MIT and the author of many influential books on linguistics, including Aspects of the Theory of Syntax and The Minimalist Program, both published by the MIT Press.