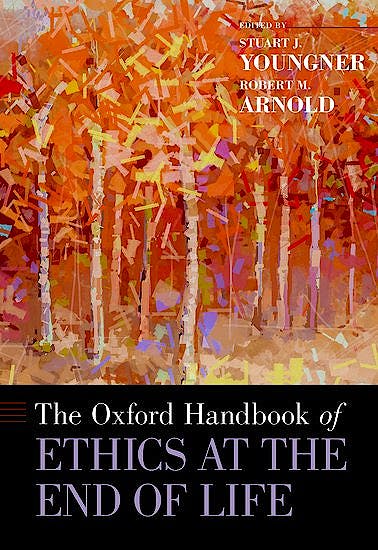 The Oxford Handbook of Ethics at the End of Life

This handbook explores the topic of death and dying from the late twentieth to the early twenty-first centuries, with particular emphasis on the United States. In this period, technology has radically changed medical practices and the way we die as structures of power have been reshaped by the rights claims of African Americans, women, gays, students, and, most relevant here, patients. Respecting patients' values has been recognized as the essential moral component of clinical decision-making. Technology's promise has been seen to have a dark side: it prolongs the dying process. For the first time in history, human beings have the ability control the timing of death. With this ability comes a responsibility that is awesome and inescapable. How we understand and manage this responsibility is the theme of this volume. The book comprises six sections. Section I examines how the law has helped shape clinical practice, emphasizing the roles of rights and patient autonomy. Section II focuses on specific clinical issues, including death and dying in children, continuous sedation as a way to relieve suffering at the end of life, and the problem of prognostication in patients who are thought to be dying. Section III considers psychosocial and cultural issues. Section IV discusses death and dying among various vulnerable populations such as the elderly and persons with disabilities. Section V deals with physician-assisted suicide and active euthanasia (lethal injection). Finally, Section VI looks at hospice and palliative care as a way to address the psychosocial and ethical problems of death and dying.