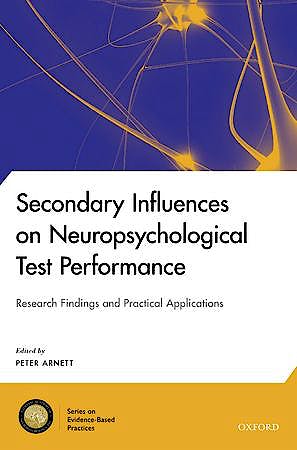 It has long been appreciated among clinical neuropsychologists that both primary and secondary factors contribute to cognitive dysfunction in neurological patients. Primary influences are the direct result of the extent and location of damage to the brain. Secondary influences stem from something associated with brain injury or disease besides the specific areas of the brain affected. For example, a patient with a neurological disease may develop depression, something which in turn often impacts cognitive functioning. Other secondary factors associated with disease besides depression can also negatively impact cognitive functioning, including anxiety, pain, fatigue, and motor impairments, to name a few.

Despite the widespread appreciation of the importance of such secondary factors on cognitive functioning in clinical neuropsychology, there has never been a single source for this information that is readily available to clinicians and researchers. The present volume provides such a source, using an evidence-based framework comprised of two broad sections. The first section includes chapters that comprehensively address particular secondary influences, independent of any particular neurological disorder. For example, there are chapters on the impact on cognitive functioning of depression, anxiety, fatigue, pain, diagnosis threat, and symptom invalidity. The second section has chapters that focus on specific neurological conditions and the most salient secondary factors that need to be considered in these conditions. Multiple Sclerosis, HIV, Parkinson's Disease, Traumatic Brain Injury, Alzheimer's Disease/MCI/Stroke, and Epilepsy are all considered. The chapters include vivid case studies that illustrate the principles outlined in the chapters to help clinicians consider how such principles can apply to particular patients. Chapters also include evidence-based guidelines for clinical practice. The final chapter highlights some areas especially in need of further research and study that will be of particular interest and importance to clinicians.

Part III: Assessment & Treatment of secondary influences, plus final summary chapter
16. Assessing Secondary Influences and Their Impact on Neuropsychological Test Performance
Peter Arnett and Amanda Rabinowitz
17. Summing Things up: Where We Stand, Where We Need to Go From Here
Peter Arnett