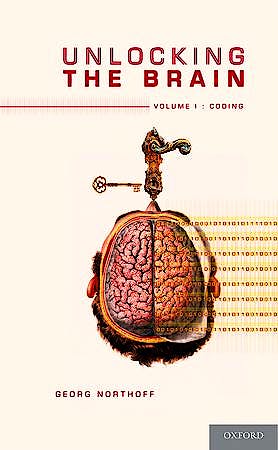 Unlocking the Brain, Vol. I: Coding

Neuroscience has made considerable progress in figuring out how the brain works. We know much about the molecular-genetic and biochemical underpinnings of sensory and motor functions, and recent neuroimaging work has opened the door to investigating the neural underpinnings of higher-order cognitive functions, such as memory, attention, and even free will. In these types of investigations, researchers apply specific stimuli to induce neural activity in the brain and look for the function in question. However, there may be more to the brain and its neuronal states than the changes in activity we induce by applying particular external stimuli.

In Volume 1 of Unlocking the Brain, Georg Northoff presents his argument for how the brain must code the relationship between its resting state activity and stimulus-induced activity in order to enable and predispose mental states and consciousness. By presupposing such a basic sense of neural code, the author ventures into different territories and fields of current neuroscience, including a comprehensive exploration of the features of resting state activity as distinguishable from and stimulus-induced activity; sparse coding and predictive coding; and spatial and temporal features of the resting state itself. This yields a unique and novel picture of the brain, and will have a major and lasting impact on neuroscientists working in neuroscience, psychiatry, and related fields.