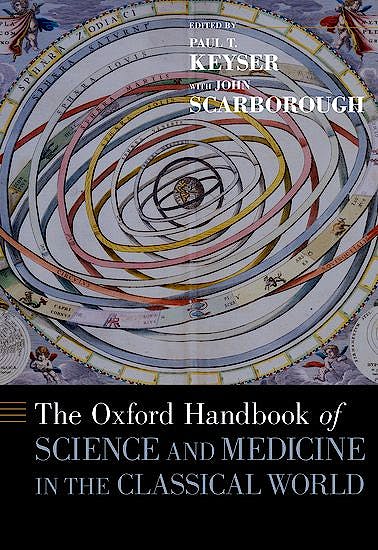 Oxford Handbook of Science and Medicine in the Classical World

With a focus on science in the ancient societies of Greece and Rome, including glimpses into Egypt, Mesopotamia, India and China, The Oxford Handbook of Science and Medicine in the Classical World offers an in depth synthesis of science and medicine circa 650 BCE to 650 CE.

The Handbook comprises five sections, each with a specific focus on ancient science and medicine. The second section covers the early Greek era, up through Plato and the mid-fourth century bce. The third section covers the long Hellenistic era, from Aristotle through the end of the Roman Republic, acknowledging that the political shift does not mark a sharp intellectual break. The fourth section covers the Roman era from the late Republic through the transition to Late Antiquity. The final section covers the era of Late Antiquity, including the early Byzantine centuries. The Handbook provides through each of its approximately four dozen essays, a synthesis and synopsis of the concepts and models of the various ancient natural sciences, covering the early Greek era through the fall of the Roman Republic, including essays that explore topics such as music theory, ancient philosophers, astrology, and alchemy.

The Oxford Handbook of Science and Medicine in the Classical World guides the reader to further exploration of the concepts and models of the ancient sciences, how they evolved and changed over time, and how they relate to one another and to their antecedents. There are a total of four dozen or so topical essays in the five sections, each of which takes as its focus the primary texts, explaining what is now known as well as indicating what future generations of scholars may come to know. Contributors suggest the ranges of scholarly disagreements and have been free to advocate their own positions. Readers are led into further literature (both primary and secondary) through the comprehensive and extensive bibliographies provided with each chapter.

Paul T. Keyser studied physics and classics at St. Andrew's School, Duke, and Boulder. After teaching Classics at Edmonton and Cornell, he returned to his first love, programming. Keyser currently works as a Site-Reliability Engineer for Google in Pittsburgh. He has published work on gravitational physics, stylometry, and ancient science and technology.

John E. Scarborough, MD is certified by the American Board of Surgery in Surgery and Surgical Critical Care. He completed his General Surgery Residency at the Duke University School of Medicine, where he also served as a Surgical Critical Care and Abdominal Transplant Fellow. Scarborough is currently an associate professor in the Department of Surgery at University of Wisconsin, Madison.